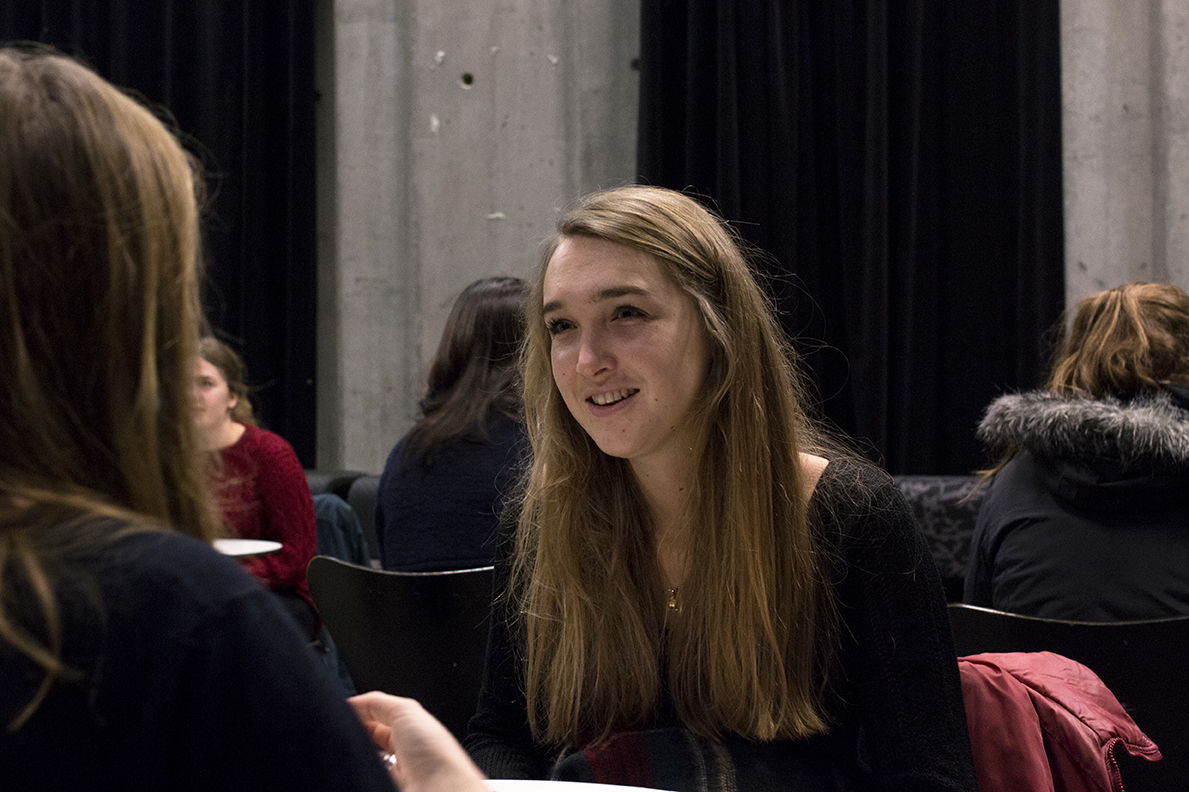 Tables set up the «date way», with one chair on each side, are placed all around in one of the rooms at Det Akademiske Kvarter, the student house in Bergen. After four minutes of talking, the students sitting in them switch seats to meet someone else. They are participating at a speed-friending-event, coordinated by Erasmus Student Networks, the Student parliament at the University of Bergen, and SAIH Bergen. This is a part of the event International Days, which is happening this week.

– We just arrived in Norway, and this event makes you feel more comfortable in the new environment. We don’t know anyone here, and the speed-friending introduces you right away to people with the same challenge, says french Soléne Chatelain who is in Bergen on an exchange through the Erasmus network.

Erlend Søbye Grønvold, the coordinator of International Days, says that the speed-friending event usually takes place at the start of each semester.

– It’s an arena where people with similar interests can meet, and I think some international students will find it easier to get to know Norwegian students through events like this one.

Hadi Haidari is from Australia and came up north to experience the Scandinavian culture. He was not sure before he arrived whether or not Norwegians were able to speak English, but quickly figured out that this was not going to be a big problem.

– I’ve been in touch with quite a few people from Bergen now, and they’re beautiful people. One girl in my class was fluent in English, I couldn’t even tell that she was from Norway.

Chatelain’s classes have not yet begun, so she has not gotten the opportunity to interact with Norwegian students.

– At Fantoft there are many international students, so I haven’t really talked to anyone from Norway except today. I talked to a couple, I think, and I hope to get to know them better.

A similar event also took place at Fantoft, but Grønvold says that despite the competition, quite a few students have made their way downtown as well.

– There is some competition, but plenty of students come here to have a good time as well, he says.

Both Haidari and Chatelain were introduced to a bunch of potential friends at the event. Haidari also thought it refuted some of the stereotypes out there.

– We were told that Norwegian could be somewhat reserved, but I don’t think there’s much truth in that. I find it really easy to get in touch with them, and they’re quite open, the Australian student says.

MAKING CONVERSATION: Hadi Haidari thinks the event was a great way of getting to know other students. FOTO: THEA ELISABETH STEPHANSEN

Chatelain agrees, but adds that after several rounds of talking to different people, she got a bit tired.

– It’s a tricky way of meeting people, because in the beginning you have lots of energy, but towards the end you get a bit tired.

Lucky for them, this wasn’t their last shot at meeting people through the International Days: There are events at Det Akademiske Kvarter on wednesday and thursday as well.