A surprise was in store for exchange student Abiyot Dagne Belay when he arrived at Fantoft: A stranger he would share his bedroom with for the semester. 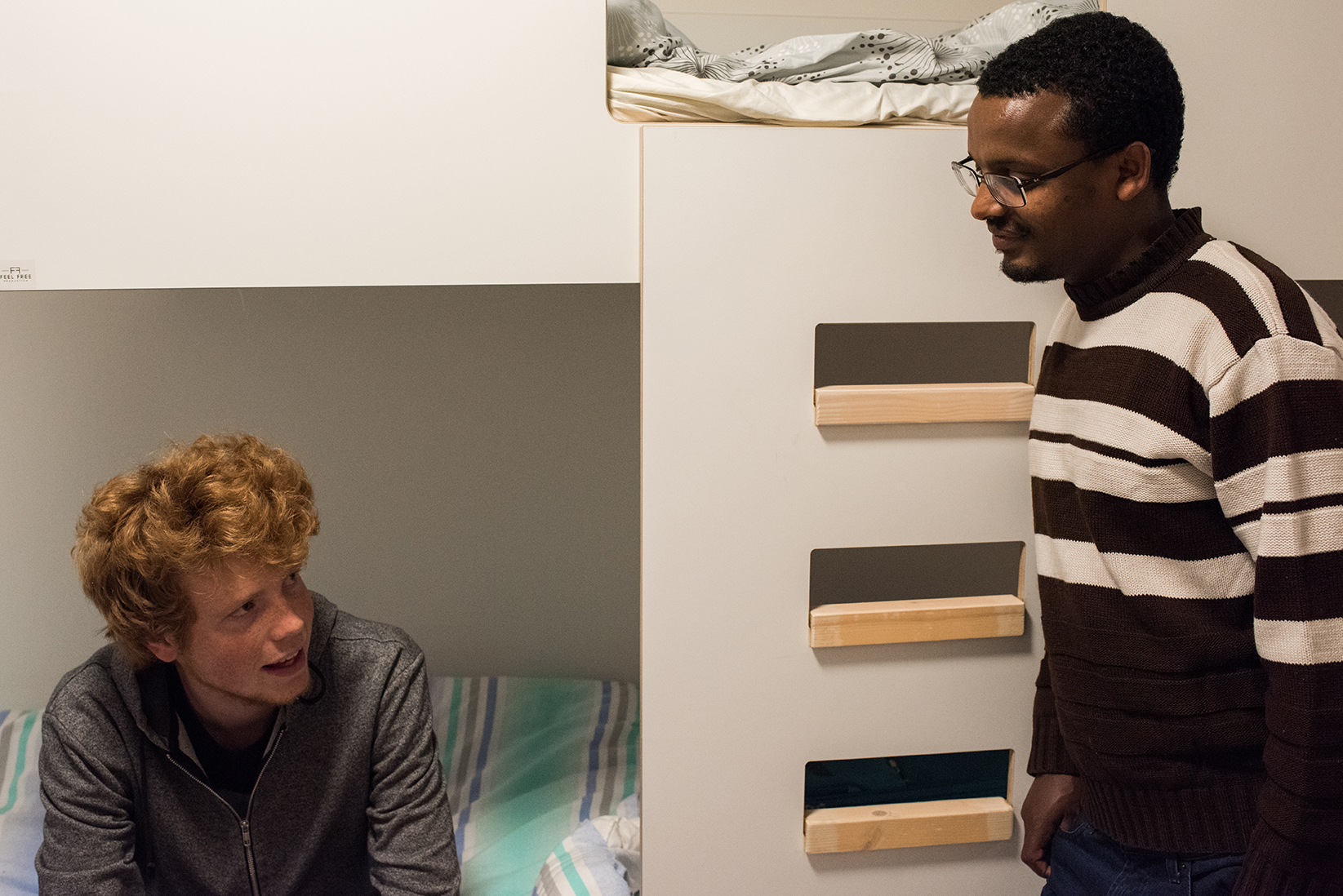 SURPRISE. Abiyot Dagne Belay (right) did not expect his room mate Philipp Dahlinger when he arrived at Fantoft TRE. They have become good friends, but Belay would still have appreciated a heads up that he would be sharing a room during his exchange. PHOTO: ELLISIF NYGÅRD

– I was under the impression that I was going to have a single apartment. That changed when I entered the room, says Ethiopian exchange student Abiyot Dagne Belay about the day he arrived at Fantoft student housing.

Belay had made the long trip from Ethiopia that very day, and was looking forward to relaxing in his room after the journey. Little did he know that he would not be relaxing alone.

The new building at Fantoft, called Fantoft TRE, has a new concept of shared rooms. Where previous Fantoft residents have had their own bedroom and shared kitchens, those in the new building also share a bedroom with a stranger.

In the contract Belay had to sign before he arrived in Norway, the shared room was referred to by Sammen as “Hybel – compact”. No further information about the room type was provided in the contract. On the website, it is referred to as “Single room – compact.”

– I intuitively thought that ‘Single room’ meant that I would have my own private space in my own room, Belay says.

LIMITED INFORMATION. This is all the contract the exchange students signed says about what kind of room they would be living in.

The Ethiopian exchange student is not the only person not  to understand that he signed a contract agreeing to spend his exchange semester sleeping in the same room as someone else.

– I was totally surprised when I accidentally found out through a Facebook group that I would be sharing a room this autumn, British language student Sarah Hall complains.

Hall states that while she enjoys the social surroundings at Fantoft TRE, she agrees with Belay that the contract should have highlighted what the expression “single room – compact” actually meant.

– As I understood it, the word ‘compact’ referred to a room with limited space. It could not possibly be intuitive that it means that two people are accommodated in one single room, Hall explains.

The landlords at Sammen do not agree that their information isn’t sufficient.

«We have been very clear in the information on our webpage, concerning what compact living means» writes Bente Holmevik, sales and market director in Sammen, in an email.

Holmevik adds that Sammen assumed that students who applied for housing at Fantoft TRE had read about it on their webpage before applying, and that they already knew what “single room – compact” meant when receiving the contract.

However, many of the residents in Fantoft TRE never applied for it specifically. Instead, they just applied for any housing at Fantoft or other Sammen accommodations in Bergen.

– I hardly think they could expect me to read about Fantoft TRE on their webpage, considering I didn’t even choose to live there, says Laura Chong, a Chinese exchange student who also was surprised to find out she would live in a shared room for the upcoming semester.

To this, Sammen argues that the possibility that students may be allocated to a shared room, regardless of their original request, is stated clearly in the confirmation email they received after applying.

Holmevik does say that it now has come to their attention that the concept ‘compact’ seems to have been misunderstood by some students. Therefore, they promise an improvement for the upcoming semesters.

«We appreciate that the present term may not be the best. We will look into changing the name, in order to avoid any further misunderstandings in the future», Holmevik writes in the email.

Studvest has written several emails where we ask Holmevik a yes or no question about whether Sammen would like to apologize to the students who thought they would be spending their semester in a private room, but ended up in shared accomodation. Holmevik replied to the two first emails without answering the question. After a third inquiry, however, she answered.

«If some of the students had a negative experience we apologize, but as I have said before, nobody had a guarantee that they would have a single room.»