An international student estimates to have saved 50 000 NOK during the last seven semesters, just by getting his food from supermarkets' trash. 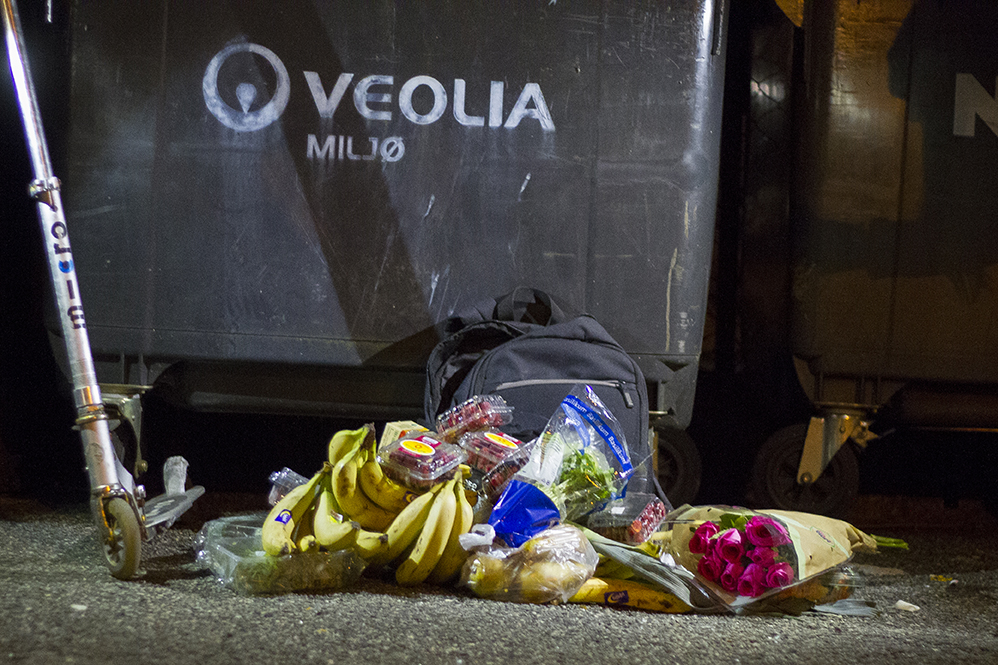 Exchange students in Bergen are always looking for ways to save money. Some have discovered a clever, but odd way of combating the steep prices in Norway. The practice of dumpster diving, raking through shops’ trash for useful items, is becoming increasingly popular among foreign students.

People go alone, or in groups, several times a week to hunt for items that are edible or salvageable. The dumpster diving students spoken to wished to remain anonymous due to concerns over it being illegal in Norway.

Christmas in a dumpster

One student has been a dumpster diver for three and a half years. He claims he was hesitant at first, thinking it was disgusting, but quickly changed his mind when he saw all the things you can get.

– It’s like Christmas. Sometimes I find enough to fill a whole kitchen table. In the past, I have found 10 kilos of salmon, 10 kilos of vegetables, sushi, cakes, bread, and chocolate.

He also often finds bikes, which he sometimes polishes up and sells, and recently even a scooter.

The student states that he does not need to shop in supermarkets much anymore, unless he really needs something, as he finds enough to sustain himself from 1-2 dumpster trips per week. Along with some friends, they visit several dumpsters each time, with Kiwi, Coop and Bunnpris being more popular choices than Rema 1000 or Meny.

– It’s usually not the best food, but it’s enough. I think I have saved 50 000 NOK, maybe even more. Mostly the food is still in the containers from the shops, so they are relatively clean.

He comments before a trip that «it’s good that it is cold tonight, because the food has kind of been in a fridge.»

He issues a word of warning, however, on what foods you should never take.

– Chicken is the main problem. As soon as it is out the fridge, salmonella can develop. I made that mistake once, and was in bed for 2 weeks.

Another issue dumpster divers face, as mentioned, concerns the legality of the practice.

– I think technically it’s illegal. We only had trouble once when Securitas came, but they can’t really do anything. Some trash owners even know, but they leave trash unlocked so they must not mind.

Jan Olav Mjøs, the regional manager of supermarket Kiwi, emphasized that «dumpster diving is not legal, and not something we support.»

– The main reason for this is food safety. Dumpster divers do not know where the groceries have been stored, or why the items have been thrown away. We do not want to risk people getting ill from food in our containers. Dumpster divers also risk cutting themselves on shards of glass.

Other than food, the student mentions that flowers have to be thrown out after being on display for two days so he finds many roses, often between 15 to 20 bouquets per week. He delivers these to whichever girls want them. «I am the dumpster gentleman», he claims, and then asks if a dumpster diving trip would make a good date.

Kate Vaanderbrak, a Canadian student, would likely not think so.

– Dumpster diving is kind of gross and weird. I personally would never do it. Ever.

Another avid dumpster diver mentions that the amount of fruit and vegetables he finds is «amazing» for his vegan lifestyle.

– If in the future I stay in Norway, my first investment would be a giant freezer to keep all the stuff I find fresh. Sometimes there are so many fruits and vegetables that you have to eat really fast before they go off. One time I found so many bananas I was eating 4 a day. I was so sick of them, eventually.

Nevertheless, he wonders about how moral the practice is.

– If you have money, is it better to leave the food for those who need it? However, I never see homeless people at the dumpsters. When there is so much food, that surprises me. If they then aren’t taking food, why can’t we? I think what is needed is a better system where supermarkets don’t throw away as much food but give it to those who need it instead.

KIWI Paradis has attempted to set up such such a system, according to Mjøs. The store, which is a popular spot for divers, has an arrangement with a charitable organisation where by they pick up groceries that will expire soon at least three times a week. They have also taken other measures to reduce food waste, such as reducing the prices of groceries that are ready to expire.