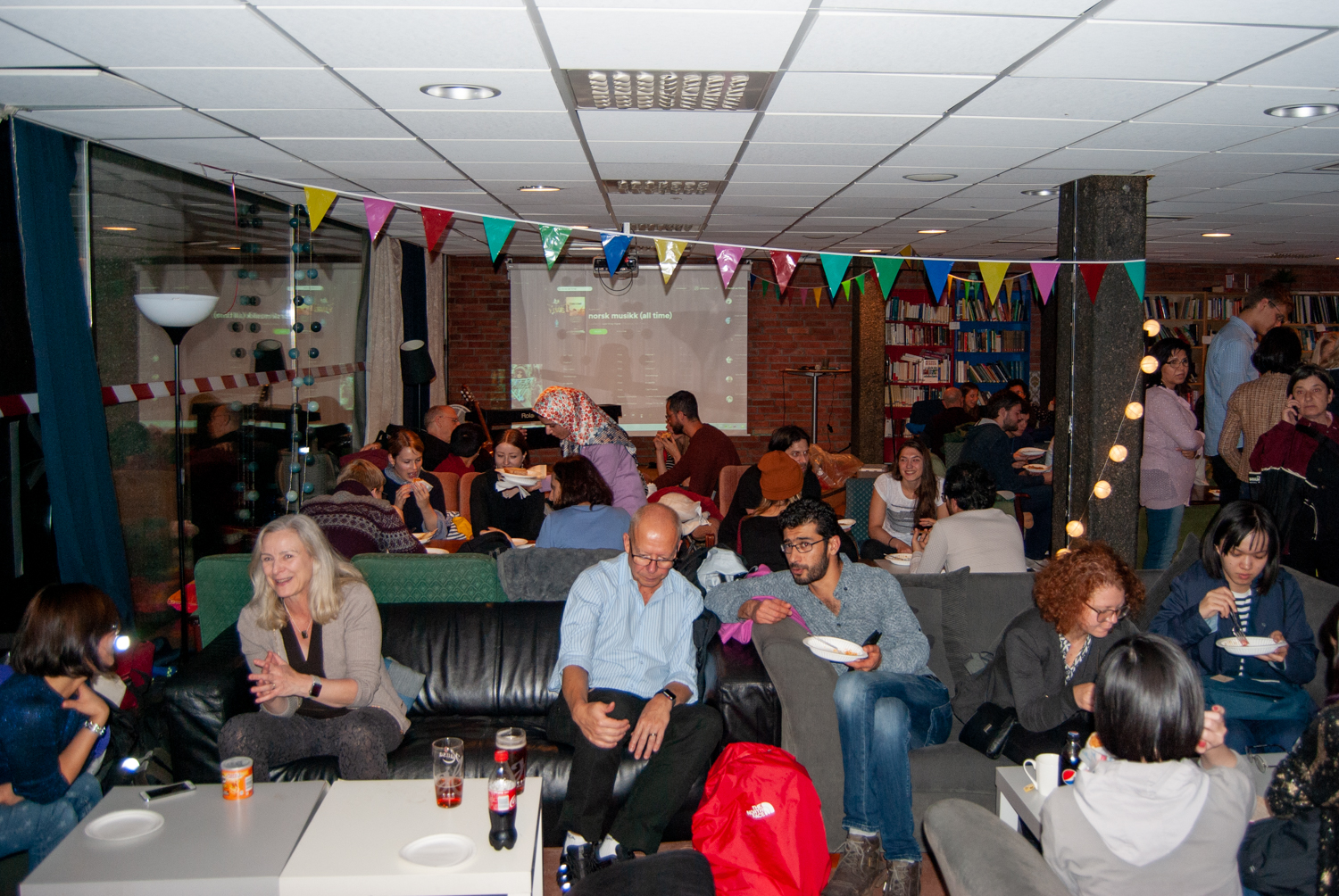 AD FONTES. Students and employees are all gathered at the student bar Ad Fontes for an evening of Norwegian fun; including food and dance. FOTO: PATRICIA VALECILLOS MARCANO

– We are very happy about the turn-out. We thought it was important to organize a social event for those students that usually do not have them. Before we’ve had smaller events like film nights, so this is very exciting, said assistant professor Pernille Myrvold.

Most international graduate students attend Norwegian language courses at the Humanities Faculty of the University of Bergen (UiB). Myrvold and Else Berit Molde are both assistant professors for the courses and thought a “Norwegian Evening” was needed to give their students a chance to get to know not only each other, but also a bit more of Norwegian culture.

Ad Fontes, the student bar at the Humanities Faculty of UiB, was scheduled to open its doors at 19:00. The event would start half an hour later. By 19:10 there was almost no place to sit and several groups were standing around while chatting.

At 19:30 Myrvold took the stage to welcome everyone and introduce the schedule. There would be Norwegian food, a quiz about Norway, a musical performance in Norwegian and in the end there would even be a little crash-course in traditional Norwegian dancing. All of this was, of course, said in Norwegian.

Most students did their best to follow suit and put English aside and speak Norwegian for the evening. Professor assistant Molde had happily noticed as well.

– It was great to hear so many students speaking Norwegian to each other. 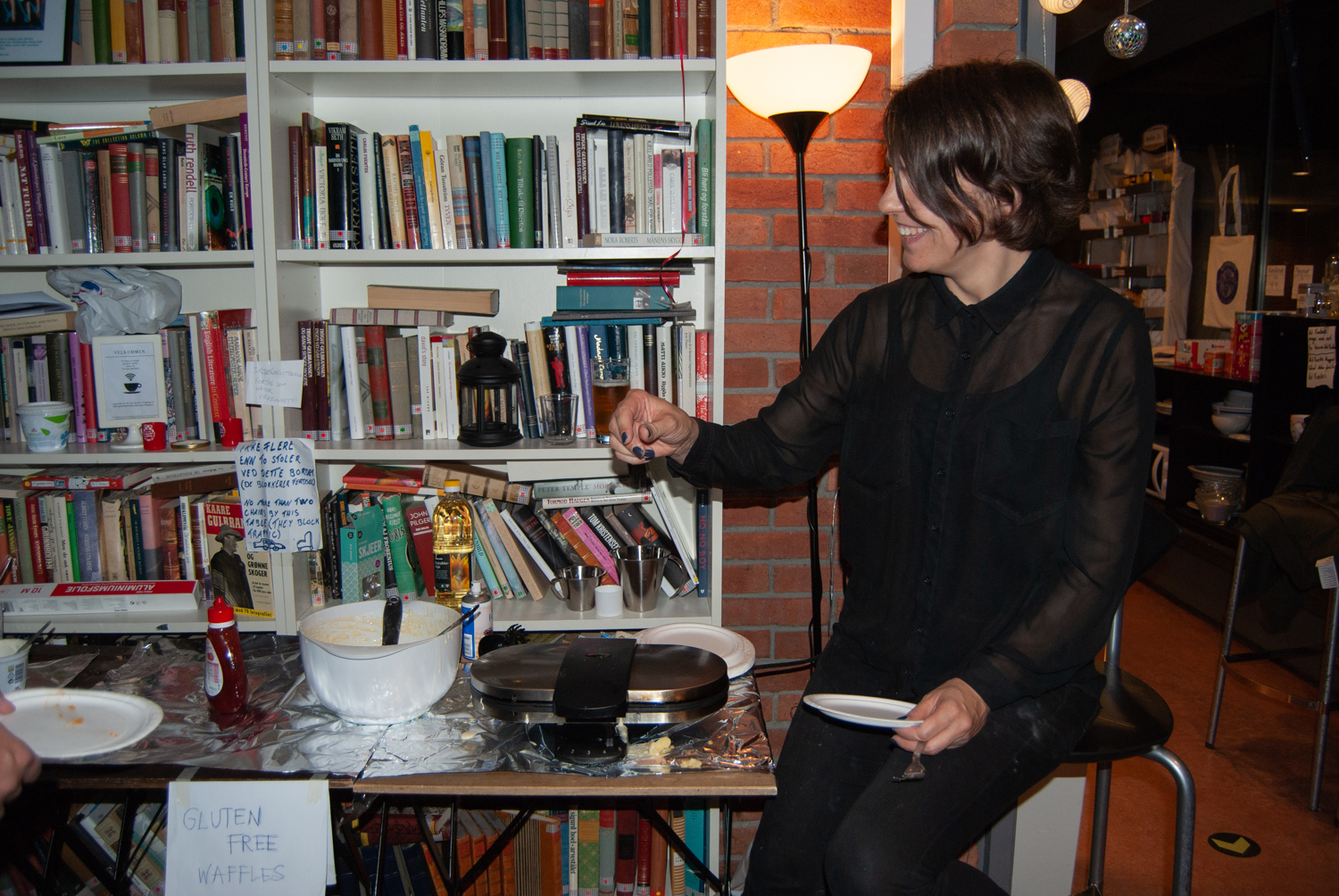 ON DUTY. Anna-Marie Kjøde Olsen, another assistant professor for the courses, was on waffle duty for the evening. FOTO: PATRICIA VALECILLOS MARCANO

A short presentation about the food followed the introduction. Myrvold named what they had to offer that evening and shared a cute anecdote about being rewarded with Søstrene-Hagelin fishcakes as a child to convince the students to try them at least once.

Rezha Habibi, an English Ph.D. student, was enjoying a plate of lapskaus while chatting to a group of students he had just met that evening. He has lived in Norway for five years but there was one food item he hadn’t tried before.

–  Gammalost! It was really good, he said.

Sandra Blanc from France was one of the few exchange students there. She enrolled in the Norwegian course on top of her courses for her English and German degree which her university back home required.

–  It’s cool to get to eat some Norwegian food. It’s not often that you get to taste it when you are just making and buying food for yourself.

What did you think of the food?

– The lapskaus was a bit spicy, I wasn’t expecting that, she said laughing. 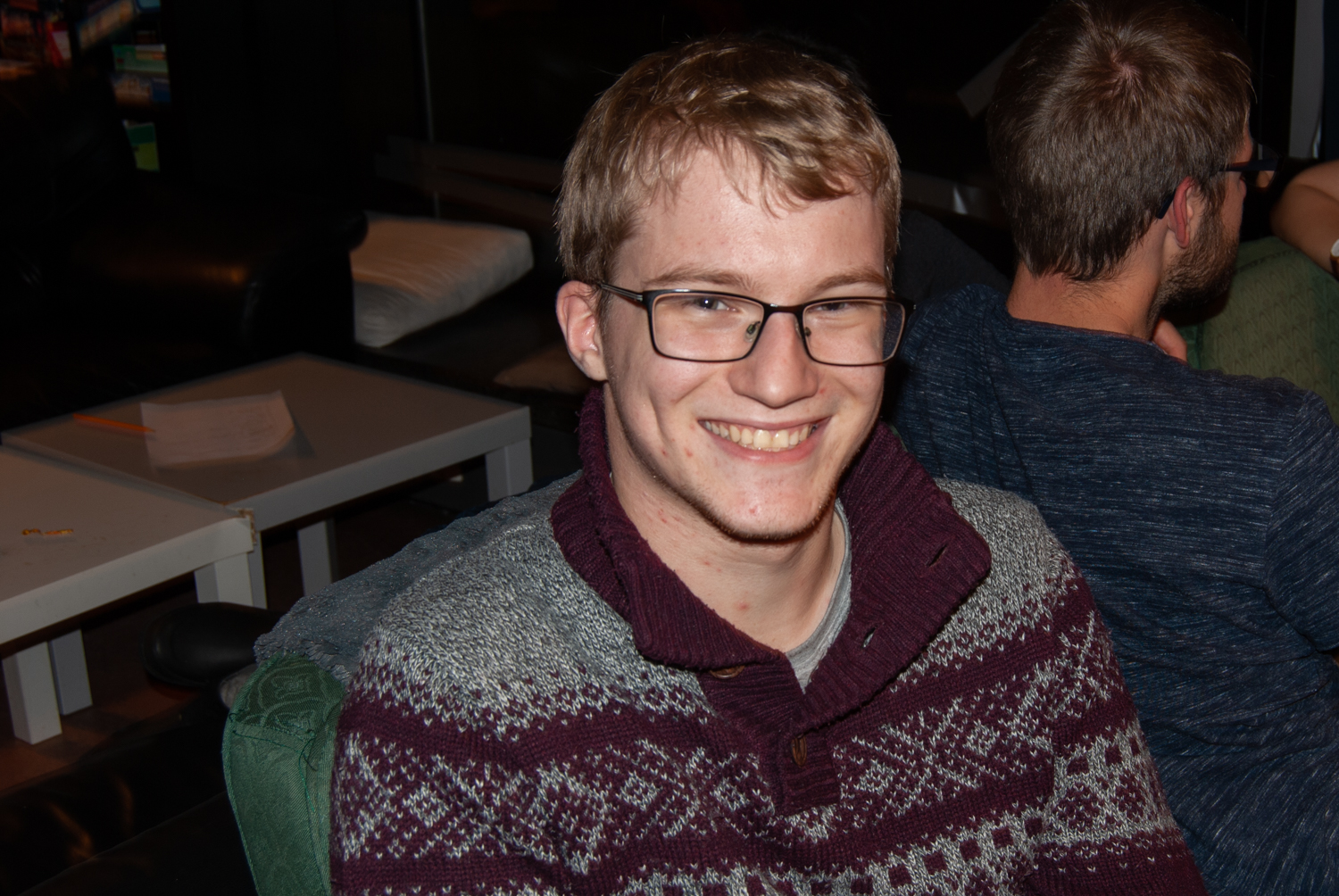 Once most people were sitting and done eating for a while, it was time for the musical performance of the evening. Geophysics master’s student, Andrew Rabbitt, sat by the piano to play and sing “Hjerteknuser” by Kaizers Orchestra in nordnorsk (“northern” Norwegian).

He is an exchange student from England but has taught himself Norwegian in the last 4 years. He speaks fluently and owes his accents to the northern Norwegian friends he would practice with online.

–  I wanted to learn Norrønt but the online resources weren’t so good, so in the end I went for Norwegian, he says.

The quiz that followed was simple enough for most people to be able to feel included in answering, even if you had only been here for a couple of months.

Then the dancing began.

Myrvold took the lead and managed to get a couple of students to join her by the stage for the first two dances. For the final dance, polka, she insisted everyone stand. “Do we really have to?”, Andrew asked, but after a few minutes he was standing and dancing with the person next to him, like most people in the room. 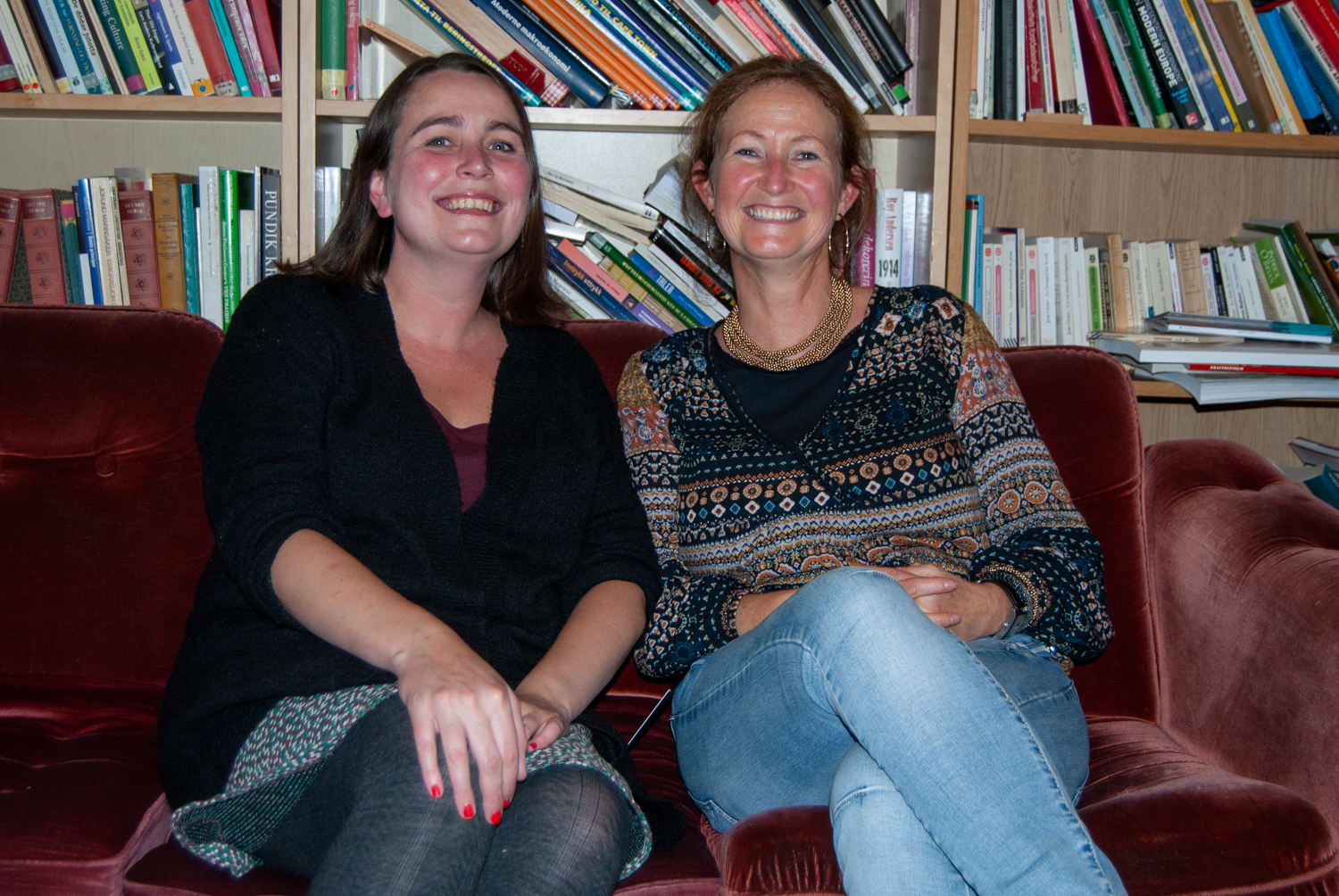 HAPPY. The main organizers of the event, Else Berit Molde and Pernille Myrvold, were extremely satisfied with the evening and look forward to another one. FOTO: PATRICIA VALECILLOS MARCANO

There will be more to come

At around 22.30 they had mostly wrapped up but a few students and employees were still left enjoying what was left of the food and talking on the sofas. Molde and Myrvold were very happy with the outcome of the evening.  Myrvold said it will probably not be the last time they have a “Norwegian Evening” this school year.

–  Many people have already asked when this will be happening again. There are no concrete plans yet but we will definitely try to make it happen, maybe for Christmas or after New Year’s.