A traditional Norwegian cabin buried deep in Hallingskeid's snowy desert proves to be an adventure for the international students. 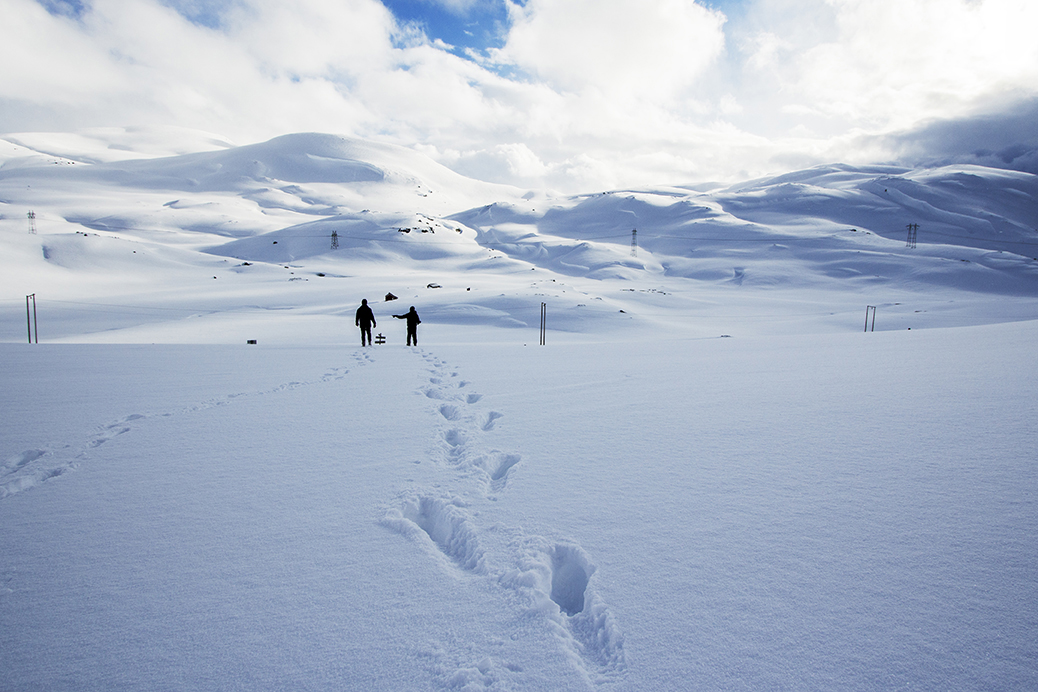 It’s midday, and the train has just stopped at the wooden Hallingskeid station. Vast whiteness meets the eyes of the international students as we all get off the train.

– Who would pack sunglasses for minus degrees? wonders a German student with no skiing precedent. Her eyes are a tight crack as she opens the first door to go outside, and they only get back in shape when entering the wooden Trekking Association cabin.

We, the group of exchange students engaging in this adventure, start to navigate through the two-storey wooden building to find some spare beds with ethereal ease.

No country for the unprepared
It turns out to be much more of a challenge to survive the exterior Winter Wonderland solely based on hiking boots, though. The snow is several feet deep and soaks our boots, making it an adventure to merely walk. Our hopes for any aid in the form of a human being disappear along with the last pair of skis behind one of the impressive snowy dunes. Every step, a surprise.

– Did I just step on a grassy mini-dune? cries a Greek student, trying to pull his foot off the snowy abyss.

Soaking wet, and yet too warmed up from enthusiasm to actually feel any cold, we enter the cabin. The group splits into three: One for the kitchen, the other for the bedroom, and the third for the WC.

Adventures even inside
Unexpectedly, the third one gets all the drama. The hydraulic system in the cabins used to be, well, pretty much nonexistent. All that jazz ended when, at around 2001, this specific cabin had pipes installed so that drinking water could actually run through its sinks and into our glasses. This is not the case with the toilets.

There’s little room left for lyricism in this topic. It all starts pretty normal, with the fact that it does look like an actual toilet seat.This escalates quickly to the snowy-white and brown pile that’s hidden within. Next to the toilet is a bucket filled with woodchips, pretty much implying what the sole anti-odorous protection from any visitor’s small souvenir left behind is.

FUN IN THE SNOW. There’s plenty of fun to be had in the snow even if your skiing skills aren’t the best. FOTO: JASMIN HOHMANN

Moving to the kitchen area, things are pretty modern. Prejudice for the hydraulics’ contemporaneity leads us to use snow instead of actual tap water, to produce some nutritious noodles with everything-in-le-backpack. For dessert, BIXITs might be offered a-plenty, but at a price that would even make the most stringent of MENY’s customers weep.

Norwegians: adventure unto themselves
So, after finishing the breakfast-lunch-dinner, we get some luck with approaching the fabric that knits this whole trip together: the Norwegians themselves.

– Immediately note your names in the guestbook, commands the Norwegian cabin leader, in unwelcoming strict teacher’s voice. But we don’t let this example define our Norwegian encounters, and rightfully so. Because to sit with them around the fireplace and exchange nature experiences is to truly get to know them.

– We voluntarily conduct ski courses every weekend for internationals. Would be a shame for them not to experience it, says one of the warm-hearted ski tutors sharing the cabin with us. His English is great, his voice willing, and his excursion proposals a-plenty.

The Norwegian system is unique. To pay your accommodation and anything you’ve used, you settle your financials yourself. An envelope of cash or credit card information is all you’ll leave behind, inside a big unmanned box. And a warning not to wound the «honesty system», that has for years been the Norwegian cabins’ beating heart, will be your only pointing finger towards the righteous path, which you are naturally advised although not strictly forced to follow yourself.

A proper cabin’s ingredients
Over some hot train coffee, we conclude that Norwegian cabins are a tough cookie; uncomfortably priced, with 360 NOK for a non-member student, and you will need that extra blanket at night. But all we comment on, during our two hours ride back home, is vacuumming with our experienced cabinmates at the end. Here, they are your shelter for the night, not the howling snowstorm, not the cosy hut.

And, oh, that view from the windows.