CORRESPONDENT: Before I went to Germany to celebrate Christmas, I didn’t think in depth about what to expect. I was pretty confident that getting back to Norway would be an easy task. 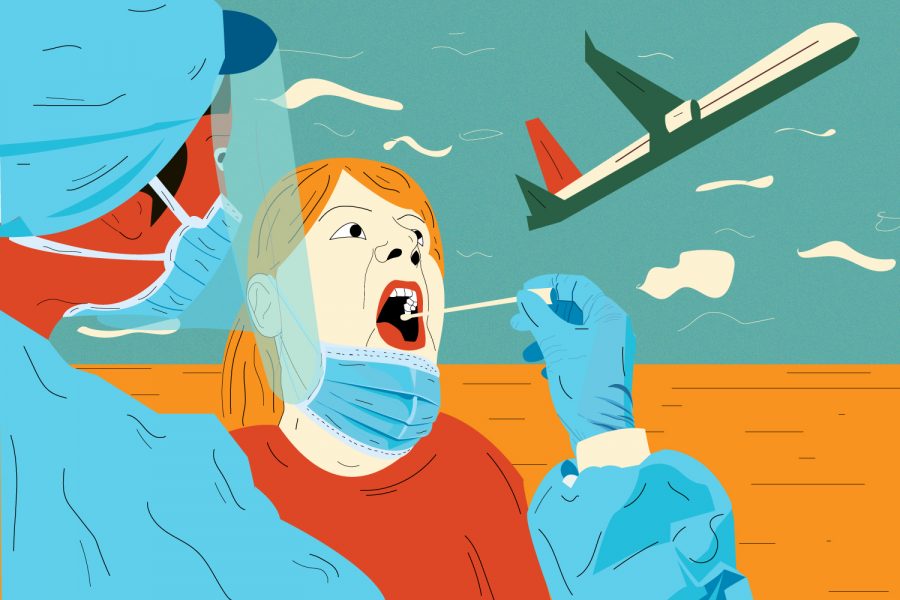 «People do not travel right now».

That was my only thought, before going home to Germany from Bergen. Once landed in Amsterdam that illusion went away in a heartbeat. KLM is one of the few airlines in Europe still operating and all their flights go through Amsterdam.

Running through the long halls to catch my plane to Hamburg, I became weirdly aware of how unused I had gotten to coping with such a huge amount of people.

I ran up jammed stairs with signs «Keep distance at all time», passed the gates going out to Italy, where people got checked for fever and ended up at a crowded gate. Two packed busses brought us to the airplane, where for the first time in months I sat next to a stranger on public transport.

Luckily, I had filled out the entry form for Germany online and didn’t have to fidget with pens and papers on a way too small airplane table like the women next to me.

Thanks Corona for sticking to the rules

I have noticed quite often over the past year that Corona seems to know very well where the borders between countries are and that it has to behave appropriately.

As the stewardess announced «According to local authorities, in Germany you need to wait ten seconds until the passenger in front of you has embarked the aircraft». Corona learned a new ten-second rule. Well, good to know that on the plane that Corona knew there was a ten-centimeter distance rule.

The German struggle of getting tested

At home, I tried to push the thoughts about entry-restrictions for Norway out of my mind for some time.

A week before my date to fly back, I got notified that I had to provide a negative test before being allowed to enter a plane with a layover in Amsterdam.

It is impossible to get tested at the doctor’s in Germany without having symptoms, so I had to find a private laboratory for a valid certificate. For the reason of Christmas and New Year’s Eve, the local laboratory was on holiday break, naturally since Corona is very well informed about the official holiday schedule in Germany.

Because of the complicated opening hours at the testing center, the first possible flight I could take was two weeks later than originally planned.

After standing in the rain for two hours, I finally got tested – or rather had to test myself.

The process involved thrusting a long q-tip down my own throat in front of a small mirror. I was very capable of doing the test myself since I know exactly where my tonsils are (that’s where you’re supposed to swipe the cotton swab) and naturally I love almost having to puke.

I ended up taking another test in a nearby town, being so anxious that the first one would be invalid or that I wouldn’t get the result in time.

It was worth the money, after the comparison of having another person thrust the swab down my throat I can confidently say, I did not manage to do that correctly the first time.

But just in time, I got my negative test results and was finally ready to go.

In Germany since December, everything except for supermarkets has been closed. This also applies to airports, which left the huge Berlin Brandenburg Airport dark and a bit gloomy.

No duty-free, just unlighted empty registers. No restaurants, just chairs put up on tables. And endless empty hallways, because the usual masses of travelers were missing.

Welcome back to Norway

Being in the air gave me a feeling of freedom that I had missed over the past months. But flying into a beautiful sun setting over snow-covered Bergen, I got nervous again.

I checked three times if I had my negative Covid19-test, my passport and the email with my entry-registration ready.

I was scared for no reason.

A police officer, after looking at all the documents, reminded me of entry quarantine and welcomed me back to Norway.

I had filled out my entry-form online the night before and being as happy as never before about my Norwegian ID-number, I passed the line of people struggling with the form at the airport.

I had to show my documents again and went to register for my third Covid19-test in three days.

It took me a bit by surprise, having to speak Norwegian again, but reading my name, the guy who tested me, just assumed I was Norwegian. With a bit of a struggle (numbers have never been my strong side in foreign languages), I even managed to tell him my birthday.

I walked into the empty luggage pick-up area and took ten kilos of books out of my hand luggage and thrust them back into my very heavy suitcase. As I stepped out into the snowy air I felt a huge relief and noticed how tense I had been the whole time.

Waiting for Bybanen, I knew I wouldn’t be able to go back to Germany any time soon, which in a way gave me a feeling of coming home.