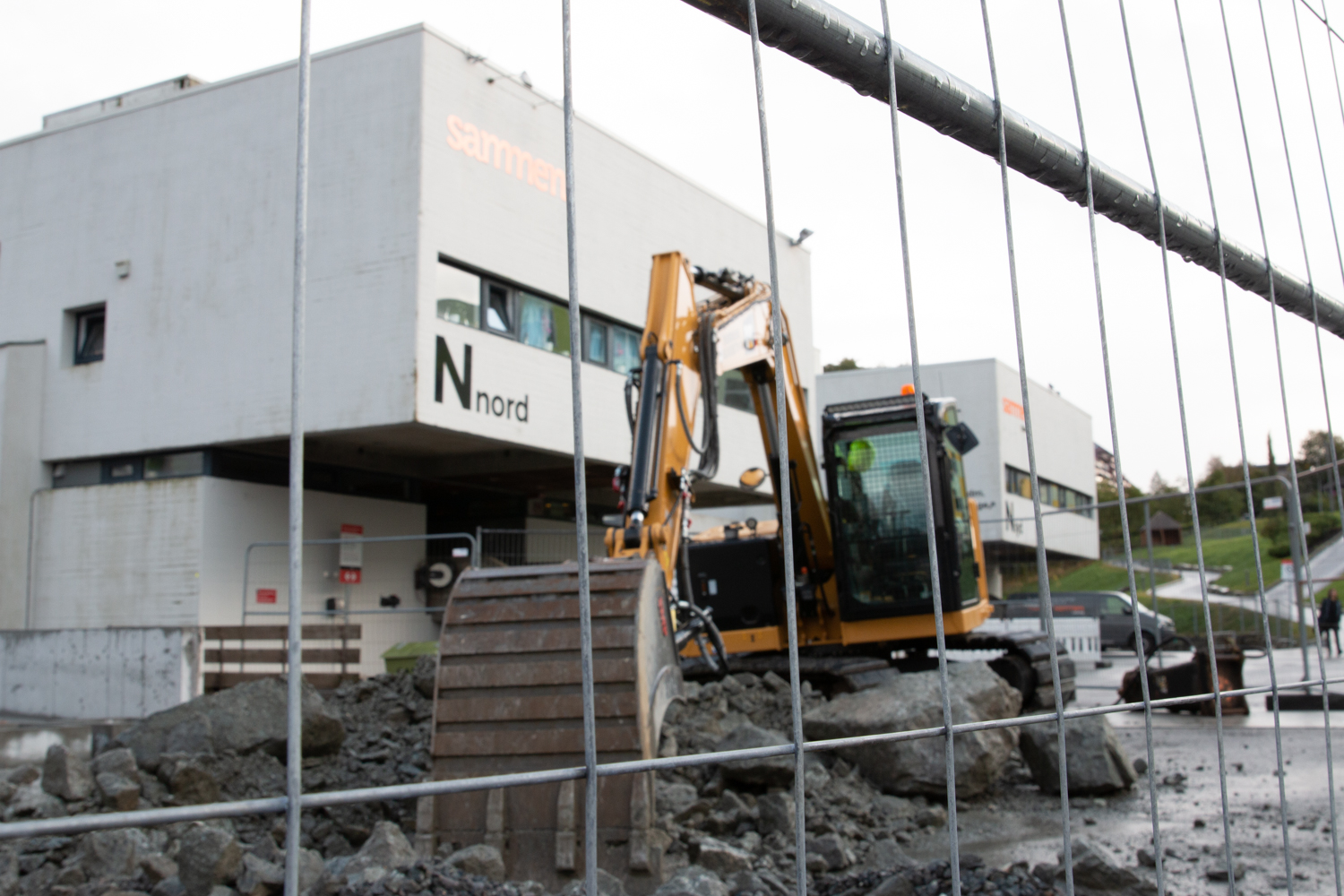 MACHINE. Construction Machinery is a common sight at Fantoft.

Waking up is never easy. The noise of the alarm clock or that overplayed wake-up tune, it is part of the day to day routine. Unfortunately, for some of the students here in Bergen, a different kind of melody is their wake-up call.

Major renovation works have been occurring at Fantoft Studentboliger for some time. These renovations have been a recurring theme in international student life in Bergen. According to a previous Studvest article written in May 2018, the works are to continue until May 2020. Major renovation works of this kind create substantial amounts of noise. Don’t expect Mozart or Beethoven: pneumatic drills and JCB extraction equipment are the name of the game.

Many of the residents living here are exchange students that are not used to the hours of the Norwegian workers. The noise often starting at seven in the morning and disappearing by mid-afternoon.

Robert André Teikari from The Fantoft Tenant’s Union (TU) explains that the construction work create annoyance of the residents.

― It is the concrete work that makes the most noise. The main problem is question of timing. Some people like to be up in the morning, others would like the work later in the day. It is hard to please everyone.

The TU is the voice of the residents at Fantoft. Teikari works with the TU and has lived at Fantoft for four years. He says the reconstruction works have always been part of his life at Fantoft. He notes the scope of the renovation:

― Almost every building managed by Sammen in the vicinity has been either renovated or built in the past years. The current work is renovating six hundred apartments in one year.

Sammen is responsible for numerous gyms, cafeterias and apartments, this includes the Training Center and student dorms at Fantoft. Teikari explains that there is a history of communication between the TU and Sammen.

―Sammen and the Tenant’s Union are in constant discussion regarding the reconstruction works.

Teikari still has some sympathy for Sammen, even after five years of living with the noise. He says there is no easy answer to the question of timing:

― It is normal to work between seven in the morning and three in the afternoon in Norway. The regular Norwegian worker is used to this and so that is when they will work.

With the work continuing at such a pace, Fantoft is buzzing with activity in rain or shine. All residents at Fantoft recently received an email from Sammen outlining their plans regarding the noise.

The email was brief and to the point, outlining what was happening and what was to come:

«Here is a brief overview of work that will take place on the EFGH-block the following week:

According to Cecilie Ring Bøckmann, Living Environment and Marketing Consultant at Sammen Bolig, Sammen intends to continue sending these emails.

«Sammen is weekly sending out an update to all residents at Fantoft with description of the work the following week. If there is something outside normal, this will also be notified in this e-mail,» she tells Studvest in an e-mail.