Studvest gives you a summary of what you need to know about the election. 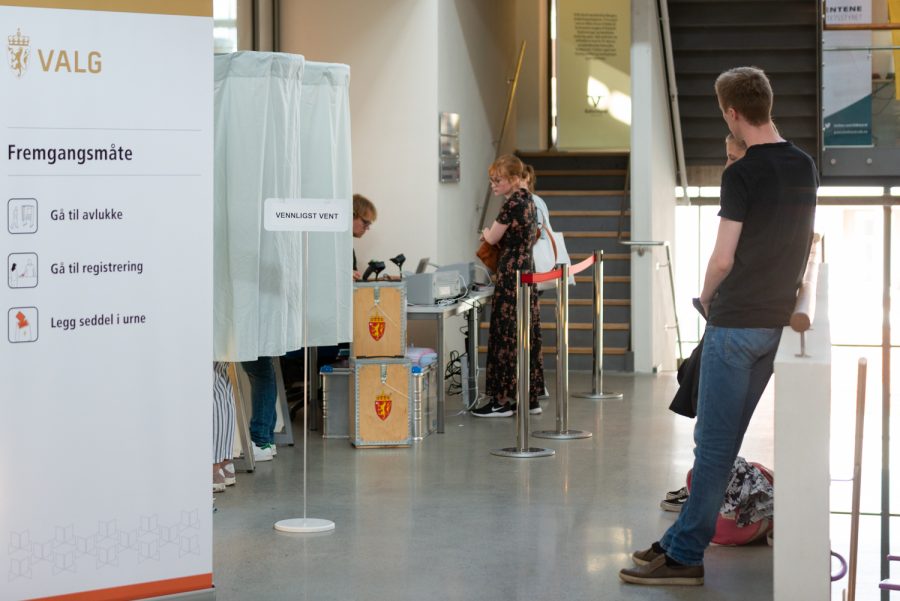 CROWDED. The Student Center has been full of students standing in line to pass their vote.

If these days you happened to pass by Festplassen, the square in front of Byparken, you will have noticed many people intent on distributing flyers to some curious passers-by.

This is because Norway is currently holding elections to municipal councils and county councils until Monday, September 9th. The volunteers are now making their last efforts to convince undecided citizens.

Usually, elections in Norway are very pragmatic: people want problems solved. To do this, political parties try to get agreements regardless of different viewpoints, says professor Stein Kuhnle from the Department of Comparative Politics of the University of Bergen.

Nevertheless, he explaines, fragmentation and polarization in the political scene are growing. Kuhnle identifies one of the causes for this mechanism: the growing diffusion of social media.

– Maybe a lot of the opinions expressed in social media have always been there, but we never knew them. Now everything is in the open, and that helps to create more polarization.

What amazes about this year’s election is the astonishing growth of the one-issue party «Bompengepartiet» (literally Toll Party), which only a month ago was the leading party in Bergen, according to opinion polls.

– The protest that this party has created is kind of silly, even though the issue is important, says Sigrid Kluck, a 23 years-old History student, while she is standing in line to pass her vote at the Student Center.

The only purpose of this party is the removal of the tolls that the current administration has introduced around the city centre, with the main target of reducing pollution. Thanks to the fee required to pass these tolls, the municipality finances development projects.

– Bombengepartiet took everyone by surprise in Bergen. All the politician says they are doing something, but it is not said that they will. To govern a city you have to collaborate, she explains.

What is disputed by this party is that this tax is very expensive for certain categories of the population and creates inequalities. Kluck thinks that the city has seen a very deep contrast between the parties in Bergen: while the young people were protesting for the environment, the adults were protesting about the tolls and the right to use one’s own car.

Despite all this, voting is considered a very important act among the people. Although young people have voted less than middle-aged people at previous elections, only 36,4 percent aged 20-24 voted during the 2015 election according to SSB, this time Kuhnle believes things could be different.

– It will be exciting to see how this election will go, because there has been a lot of mobilization among the young people about issues such as climate change, she says.

Professor Kuhnle makes use of the opinion poll to describe what we can expect from this years election.

– The general trend now is that there will be two winners on the national level: the Center Party (Senterpartiet) and the Greens (Miljøpartiet de Grønne). The Labour Party (Arbeiderpartiet), which now have the mayor and the head of the city council, will lose a lot compared to the national elections four years ago.