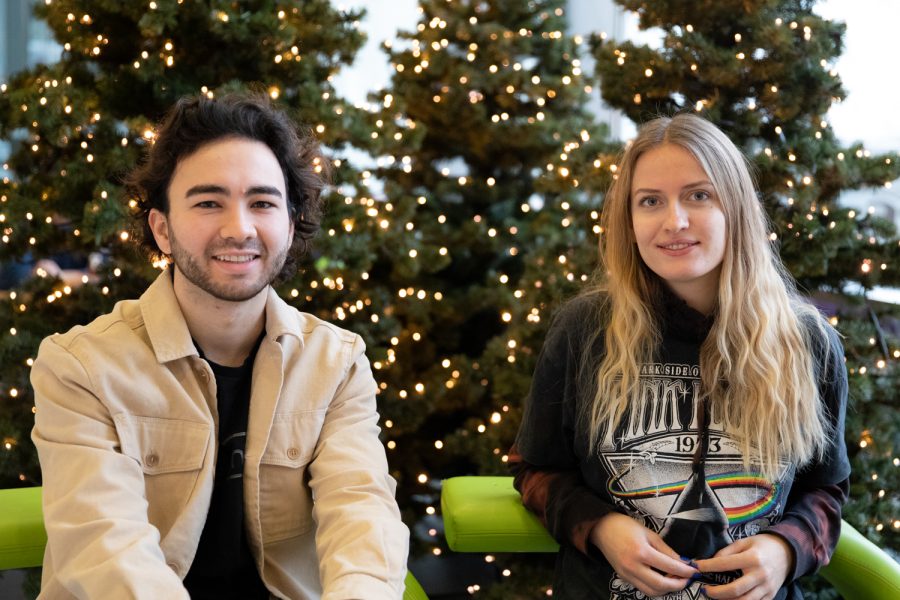 Alisher Khodjaev (26) and Aliaksandra Haurusik (24), international students at University of Bergen, will not travel home to spend the New Year’s Eve with their families this year. They experience different kinds of feelings while not having a chance to be in their home countries for winter holidays – Uzbekistan for Alisher and Belarus for Aliaksandra.

– I was not even hoping to travel home this winter

Aliaksandra has bureaucratic troubles and cannot travel internationally right now. Her passport is not valid anymore and needs to be renewed. Moreover, it can also be dangerous for Aliaksandra to travel to Belarus due to the political situation in the country.

Since 2020, after seeing the results of another presidential election where Lukashenko won, Aliaksandra has been taking part in protests and doing other opposition activity. She tells Studvest that she was taken by the Belarusian police during one of the protests, arrested for 15 days and risked missing her opportunity to continue studying at university.

Aliaksandra got to know about the “Student at Risk”-program which helped her come to Norway and began her studies here.

Entering Belarus might turn out to be a new and worse arrest for her. But Aliaksandra keeps on speaking up against the unfair elections, the violence in Belarus and the war in Ukraine from abroad.

At the same time, she shared that Christmas and New Year do not feel as special as before. Adult life, living abroad, studies and being used to spending holidays without her family make this kind of holiday seem like something ordinary.

– There are more reasons to meet up with family, not only New Years Eve, she mentions.

Alisher Khodjaev (26) has a different reason for not being able to travel home: The ticket prices are not exactly affordable. According to Alisher, a round trip to Tashkent would cost him a minimum 9000 kroner.

– I was not even hoping to travel home this winter, he says.

Because of high prices for traveling home while studying in foreign countries, Alisher has not been at home since april.

Visiting family became a rare occasion for many international students just like for Alisher. For Alisher personally, it is sad to not be able to visit his family and his home city Tashkent, but mantaines that he has gotten used to it. He just takes it as it is, hoping for an opportunity to see his family soon.

Both Aliaksandra and Alisher live at the Sammen housing at Fantoft. They are glad to know that Fantoft is planning celebrations on Christmas and New Year’s Eve.

– My neighbour told me that Fantoft is making plans for those who stay in Bergen for the holidays, says Aliaksandra.

Tillitsutvalget (TU), the student representatives at Fantoft, have planned a program full of various activities for winter holiday this year. The main goal is to not let anyone who is left in Bergen for the holiday feel lonely. The Fantoft club was open during Christmas Eve for students to have fun with each other on a special day.

Aliaksandra and Alisher do not worry about feeling lonely or sad about not being with their families during the christmas week and New Year’s Eve. The plan for Aliaksandra and Alisher is to relax and see the offers coming from Fantoft, from neighbours, from friends and join someone somewhere. They are open for spontaneous fun.

– It will be fun, they stated.

If in Norway the main day in winter holidays is Christmas on the 24th December, in both Belarus and Uzbekistan it is New Year’s Eve. Uzbekistan is a muslim country, so the reason for Christmas not being popular is clear.

People in Belarus also claim New Year’s Eve as the day for the main celebration just like most other post-soviet countries do.

Here, New Year’s Eve is about a big dinner, giving presents to each other, making wishes, waiting for the very hour 00:00, watching the president’s speech on the TV. The entire night is spent in celebrations with family and friends.

Christmas in Belarus is on the 7th of january, the Orthodox Christmas. It is celebrated in a calmer way, by having a nice dinner and cozy atmosphere with the family.