Fancy spending your semester sleeping in a bunk bed with a complete stranger? Many internationals will do so when the new Fantoft building opens. 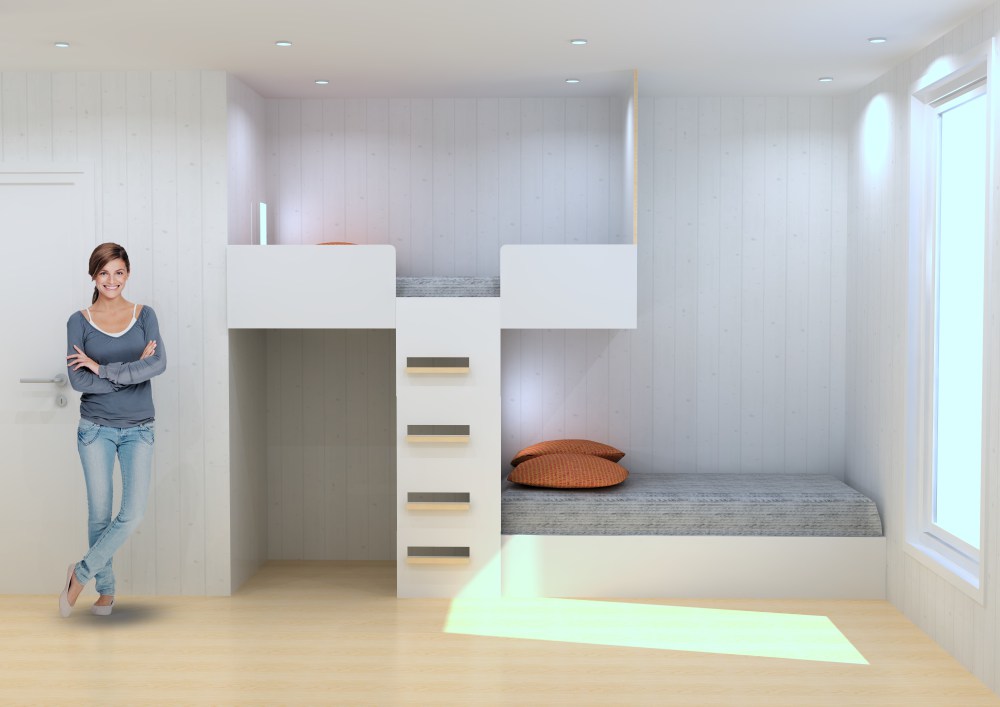 It’s no secret: the SiB website and the constant construction at Fantoft foreshadow the introduction of a new building opposite blocks E-F-G.

And the new building, called Fantoft TRE, will be needed: SiB only have appartements for approximately 15 per cent of the students in Bergen. In order to increase that number as much as possible, the rooms in Fantoft TRE will be shared. This means two beds instead of one in each bedroom, like seen in the picture.

Living on your own, with others

SiB call this «compact living». The concept is mainly aimed at international students, and while SiB is enthusiastic about giving a higher number of non-Norwegians a

CROWDED. There will be as much as 16 people sharing a kitchen in Fantoft TRE. PHOTO: B+B ARKITEKTER AS

place to live, several internationals are sceptical to the idea.

– Skyping with your parents in a foreign language or binge-watching «13 Reasons Why» can be a distraction to others, Lisa Klein Haneveld, a Dutch Erasmus exchange student from block C, says.

She thinks the current system of sharing your kitchen and bathroom with others works well, and that the sleeping and relaxing time should better not be shared with others.

– I understand the underlying idea: bringing international students in direct contact. However, sharing a kitchen will already lead to meeting and befriending new people. You have some privacy in your bedroom, and find all the friends you need inside, and eventually outside, your common kitchen, Haneveld says.

Not lured by price

An Erasmus student living at Fantoft in a flat with a shared kitchen today pays around 3165 NOK per month. The rent for a room with a bunk bed will be 2850 NOK, according to SiB.

– The price difference isn’t that big, so I wouldn’t go for a shared room, says Thanasis Sassalos, a Greek student on exchange for the spring semester.

The fact that the price difference isn’t bigger compared to a «regular» Fantoft room might be a result of the more modern standard Fantoft TRE will bring compared to the current blocks built in the early 70’s.

– The rooms are not more «privileged» than the rooms in «old» Fantoft, but they are built in 2017 standards so I assume students might find them different and perhaps better, says Cecilie Ring Bøckmann, Marketing Consultant of SiB Bolig.

The kitchen is still to be used on a shared basis, with 8 rooms sharing each kitchen on the two ends of each floor, states Bøckmann.

One upcoming change, thus, is that 16 persons will share a big common kitchen if there’s two people living in each room.

This is not an optimal solution, according to Haneveld.

– I share my kitchen with 5 others at the moment, and we already have discussions sometimes on how to make sure the cooking area won’t be so dirty that it eventually will start cooking for itself. With 16 people, there must be multiple furnaces, many more refrigerators and way bigger tables, she observes.

When seeing the drawings for the room, Sassalos does however note that he is a fan of the idea of a building with wood as the only material.

– I like how the new material is more beautiful, and of course more ecological, Sassalos observes.

Despite being critical to shared rooms, both Sassalos and Haneveld look forward to the renovations. They also note that they are quite content with the way the rooms are constructed at the moment.