Weekend drinking is a given. But have you seen the prices? It seems to be a reflection of a culture where alcohol is a key social factor. 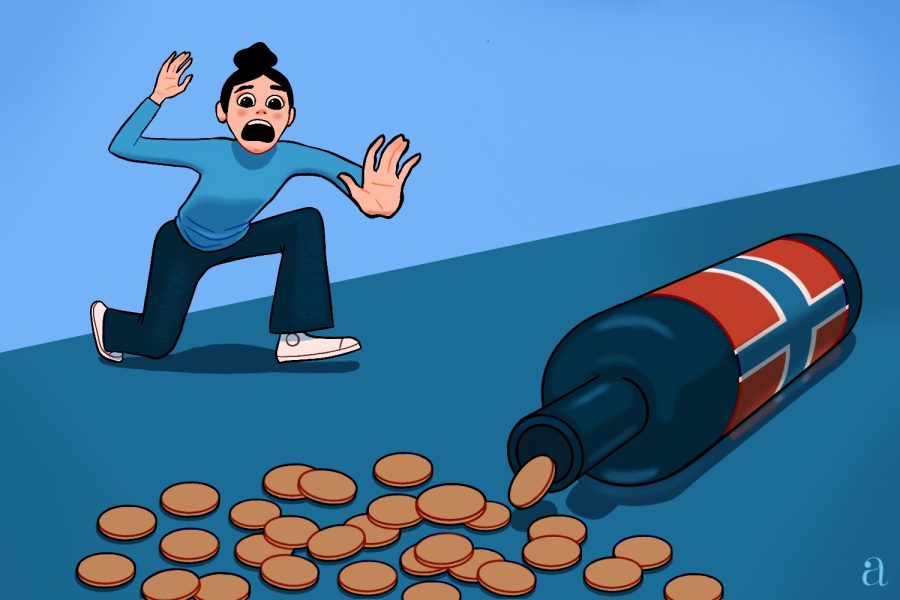 ALCOHOL PRICES. «What is going on with alcohol in Norway?»

It was my first Saturday night in Norway. Around 9 p.m. while walking home, down the stairs of Johanneskirken, I noticed a drunk girl lying curled up on the side of the road. While trying in vain to help her, two Norwegian guys walked by. The first one said, «leave it, it’s normal» and the second one «don’t worry, she’s fine». Once I found her wallet with her address, I took her home. The word normality struck me.

In Norway, the numbers are growing. Compared to 20 years ago, alcohol consumption has risen by 40 percent, according to results from the Institute of Health. And this is in spite of the prices of wine, beer, and spirits in Norway being among the highest in the world due to taxes. Every year, the average Norwegian consumes about eight liters of pure alcohol. A series of considerations led me to wonder «what is going on with alcohol in Norway?».

Curious to know more, I went to the student bar, Ad Fontes, to collect a historical overview. Here I talked to Knut Camillo Tornes, a graduate of the Faculty of History and currently a student of political science.

Tornes explained that the alcohol price has its roots in World War I, which triggered a series of governmental measures concerning the consumption and sale of alcohol. In the same year, Norway introduced the so-called «Alcohol Act», a comprehensive alcohol law.

– This law created a state monopoly on alcohol in a bid to minimize the health and social problems caused by its consumption and to remove any logic of private profit, Tornes explained to me.

– Three of the decisive measures were: the establishment of Vinmonopolet,  the increase of taxation, and time restrictions on the sale and purchase of alcohol.

During the history teaching of Tornes, Myles Godfrey Hoefle, a current bachelor student at the Faculty of History, broke into the conversation contributing to my investigation. Myles explained that the reasons why Norway moved towards a strict policy on free alcohol sales are rooted in social, religious, and political concerns.

– In the 1920s, there was widespread social frustration due to the poor economic conditions of Norway, particularly among the working class, Myles told me.

This tension seemed to find its fulfillment in the abuse of alcohol, he clarified.

– Inevitably, this situation had an impact on family serenity and for this reason, the government, in the 30’, in the hands of the Labour Unions and the Protestant community, took drastic measures to try to restore the emotional balance

As pointed out by the two students, the situation has remained unchanged until today. To this surprising discovery, the budding historian, Hoefle, replied.

– Apparently, despite the lack of motives and the inevitable psychological and statistical development, Norwegians have learned to live with the prices and restrictions, thus the social need to re-evaluate the situation has disappeared.

– Norway seems to be built on a paradox. A seesaw between a solid awareness and the necessity to consume alcohol as a disinhibiting elixir in every social formation, he elaborated.

Confirming that perhaps the drinking culture in Norway is not anymore a matter of price, but rather a matter of culture, Hoefle took his jacket and ran to class.

Hoefle’s last statement reminded me of a conversation I had with a group of students from the UiB in a bar downtown, where several considerations emerged. One of the boys admitted: «For Norwegians alcohol is an unequivocal means for socializing and being less uninhibited. It’s for sure a problem». Another one contradicted him. «The fact that other countries have lower prices and assign a different function to alcohol does not mean that Norway has a problem». A girl interrupted: «So, would you vote for the abolition of taxes on alcohol?». Everyone answered no.