Surely, I had been on holiday in the Alps, and I'd climbed a volcano in Costa Rica. But living in the mountains – spending every day surrounded by them – is different. 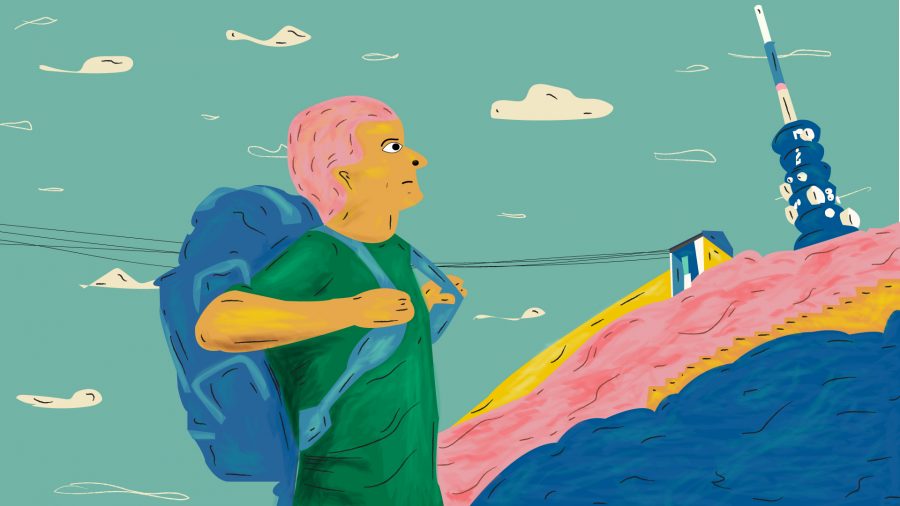 ULRIKEN: The view from my window is great, but the view when you are actually on one of the mountains is simply unbeatable.

You probably know what mountains are. Don’t worry, I do too. But coming from The Netherlands
– also called the “low countries,” flat as a pancake, and one third below sea level – I never really
knew what mountains were until I arrived in Norway. Surely, I had been on holiday in the Alps,
and I’d climbed a volcano in Costa Rica. But living in the mountains – spending every day
surrounded by them – is different.

In the Netherlands, everyone owns a bicycle. I did too; one with three gears. The first gear for
when you cycle up a bridge, the third for when you come down, and the second gear for the
other 99% of the journey. In my preparations for moving to Norway, I bought a second-hand
bike with seven (!) gears because I knew there would be mountains.

Now, living up the hill at Løbergsveien, it is needless to say that that bike has not been touched since my arrival.
I had always thought of myself as relatively fit. I practice yoga at least once a week, go to
multiple dance classes, and back at home, my bicycle was my primary mode of transportation.

That bubble was burst violently the first time I walked up the hill to my new home with two full
bags of groceries. Three days later, I could still feel my calves burning. Google Maps said 13
minutes. Google Maps said, “slight elevation.” Google Maps was wrong.

Despite my initial struggles of getting myself from A to B, my attitude towards mountains has
changed completely in just a short period of time. I didn’t think that I would like them. In fact, I
had almost chosen a different city for my studies because I was nervous about, scared almost,
of the dark and rainy mountains of Bergen. I expected that I might feel trapped and isolated, that
I would feel tiny and alone, but I have experienced quite the opposite.

I got extremely lucky with my apartment. Good size, freshly renovated, and, above all,
stunning view of Ulriken. Whereas a month ago, I would have thought that a giant mountain in
front of your window would block your view, I now know that I can see farther and wider than I
ever could before.

In the Netherlands, most houses have a view of… houses. And if you live in
one of the few high-rise buildings in town, you get to see… houses, but then from above. Here,
houses seem mere decorations, spread out over the already beautiful mountains like ornaments
on a Christmas tree.

The view from my window is great, but the view when you are actually on one of the mountains
is simply unbeatable. That is what I learned when I hiked up the mountain that greets me
through my window every morning. Seeing Bergen below on the glittering fjords, hugged by the
surrounding mountains, truly put things into perspective for me.

And while I am still mystified by how parents can get their kids to that daycare halfway up Ulriken every morning and then have the energy left to go to work, I can now see why Norwegians are obsessed with their «friluftsliv». When I reached the top of Ulriken after a long hike and looked down to see my new home in the
midst of an overwhelmingly beautiful landscape, I knew: I love the mountains.