Norwegians have a very bizarre Easter habit. Something about the holiday, which essentially is the celebration of Jesus’s resurrection, brings out a murder-lusting side in them. 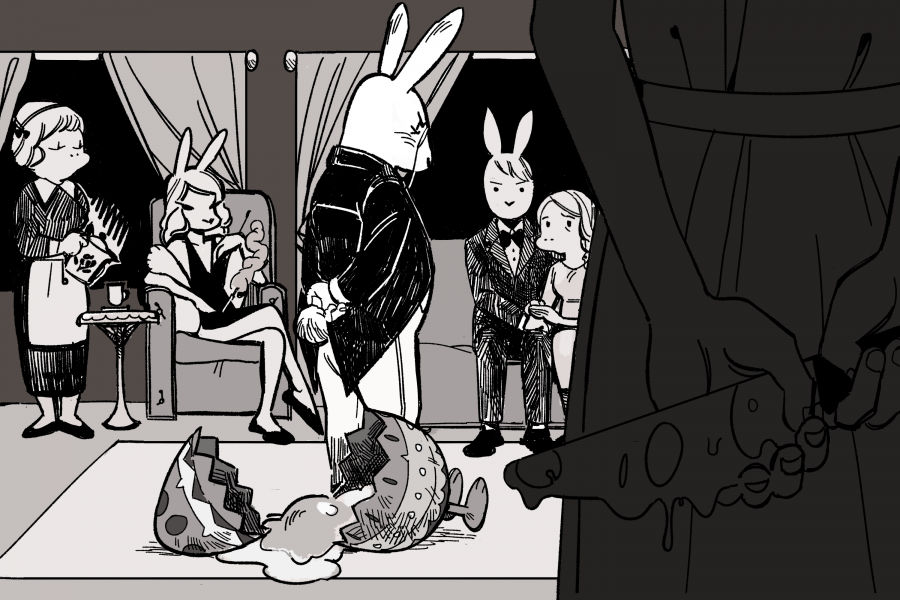 MURDER. Around Easter not even the eggs are safe in Norway. Illustration: Gjertine Gjernes

In early March, book stores start clearing out their shelves to make room for crime novels and detective stories Norwegians eat alive once «Mammutsalg» comes around. As Easter approaches more crime stories find their way into newspapers, magazines, onto the radio, into books, and, of course, into the TV-program.

The twisted idea of Easter Norwegians have is not about the resurrection from the tomb but rather about getting as many fictional people murdered until graveyards are filled with bodies, like nests are filled with eggs.

Bizarrely, this blood-loaded phenomenon also has its own peculiar name. The Norwegians proudly call it «Påskekrim».

Talking to my Norwegian friends it became very clear, very fast that they were clueless about the origins of their fascinating Easter tradition. They all had their guesses, but none came close to reality.

It seems to be something that brings families together, as watching people get murdered naturally does, but all jokes aside it is often named as the coziest Easter tradition.

Interestingly, the tradition’s roots are even sort of connected to Bergen. The phenomenon of «påskekrim», is said to have started with an advertisement for a book by Nordahl Grieg and Nils Lie. The two young authors wrote a crime novel in February 1923, which their publisher Gyldendal decided to advertise in the well-known newspaper Aftenposten.

The lack of thrilling things happening in Bergen, and in Norway in general, caused people to get overly excited when they read this drama promising headline in the paper. What was supposed to be an innocent advertisement for a novel, Norwegians mistook for a real story and the stunt got covered in the news nation-wide.

As a result, the book became a huge success and the publishing house Aschehoug began to focus on crimes during Easter time.

So, it was essentially a misunderstanding that caused Norwegians nowadays to be unable to imagine Easter without a good crime story.

It may also be the length of the holidays that causes people to grab a book or spend endless hours in front of the TV. With almost two weeks of free time, which a lot of Norwegians spend at their cabin (where else?), it is no wonder that they need some entertainment. And what is better suited for that than a murder story playing in the Norwegian woods, maybe in exactly such a cabin as the one you are staying in. Sounds like the perfect bedtime story to me.

«Påskekrim» comes in many ways and is an experience for the whole family. It is not just novels and stories anymore, but TV and radio shows, with crime shows from other countries being extremely famous during Easter in Norway as well. Even for kids, you can find crime fiction as a holiday read.

For years, the well-known dairy product company TINE also had a chapter of a «påskekrim» story printed on each of their milk cartons. Over Easter time, the story evolved. The announcement that this year’s story would not be printed on the cartons anymore, caused nation-wide outrage among Norwegians.

Surprisingly, many Norwegians are very unaware of the fact that they are the only people on this planet craving blood-filled stories around Easter.

But if you want to become a true Norwegian, here is an overview of all the Påskekrim that is a must-watch this Easter.

So, when the rest of the Christianity influenced world comes together with family to celebrate the resurrection of Jesus, or in a less spiritual way searches for Easter eggs and almost dies from a sugar rush of sweets, Norwegians gather to watch others die on television or huddle up in a corner to search for the murderer in a novel – their pinnacle of coziness.