Many Norwegians spend their Easter holidays reading or watching crime stories, so-called «påskekrim» (English: Easter crime). Can you solve the murder in this «påskekrim» about a group of students at Fantoft? 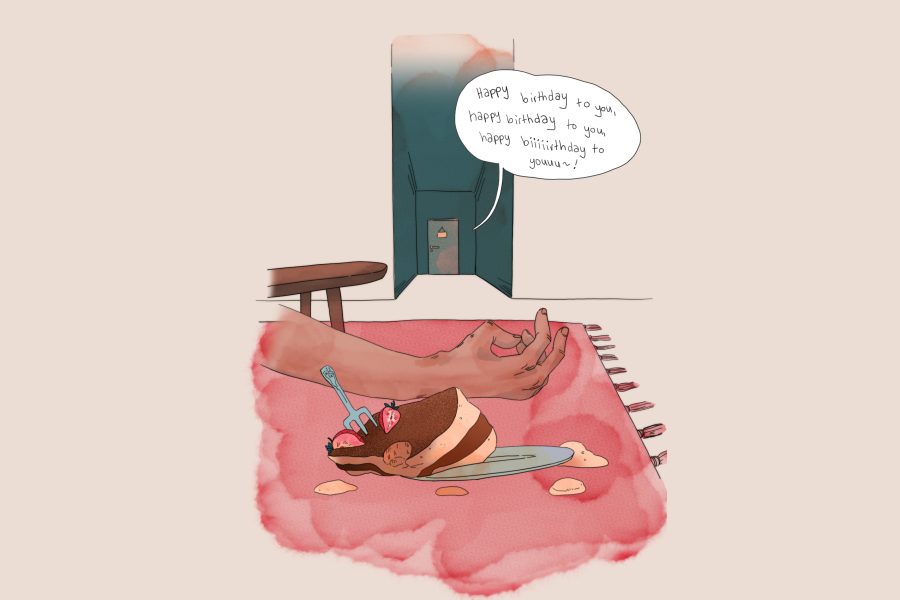 DEADLY. Can you figure out who the murderer is?

“Did you know that penguins are native to Norway?” Manual says as he follows Chris inside. The smell of freshly brewed coffee fills the entire bachelor apartment.

“What do you mean ‘native to’?” Diana asks, stepping back and closing the door behind her friends.

Heidi arrived a little earlier and waves from her spot on the bed. Chris takes off her raincoat, revealing a bright pink sweater, and hugs Heidi hello.

“Native, as in I just saw one on my way to Fantoft. It was waddling past that lake near the test center.” Manual neatly adds his boots to the line.

“Coffee?” Diana busies herself finding enough mugs to meet the unanimous nods. Her apartment is simple but cozy.

“Are you sure it wasn’t just a seagull? Or a big crow? A stretching cat?” Chris gets cozy on the bed and is already half-absorbed by her phone.

“It was a penguin, I’m sure of it! But let’s just focus on more important things, I’m starving and could literally eat a penguin right now. Of course, if they weren’t so darn cute.” Manual winks, although to no one in particular.

“So, we’re having a picnic-style Easter brunch because I only have one chair.” Following Diana’s invitingly outstretched arms, the group sits and everyone is handed a steaming cup of coffee.

“I baked some bread this morning, this one is traditionally eaten on Easter back home in Germany,” Heidi says. “And here are some hard-boiled eggs, I didn’t have time to paint them but I brought the supplies in case we should do it tog-,” Heidi’s words trail off as she gets distracted pulling item after item from a small tote bag.

“Don’t worry about it, we’re a bit too old to be painting eggs anyway,” Manual huffs and Heidi’s face falls the tiniest bit.

“How much did you bring with you? And how do you have so much time to prepare everything?” Chris asks, clearly impressed. Heidi instantly perks up, turning away to try and hide the blush blooming beneath her freckles.

“Magic.” She whispers shyly before pulling yet another Tupperware-plastic-wrap-food contraption from her bag. “The dessert should go into the fridge, of course only if you have the space. If not that’s fine too since I’m guessing we’ll be eating it soon enough anyway. But only, if you guys want to.”

“I can take this and you guys can have the proper brunch food.” Chris jokes as Diana takes the dessert from Heidi.

“I brought snacks for later today, I bought everything that screamed Easter. And then I remembered why I stopped buying candy here.” The others laugh along, imagining the cost as Manual dumps a Kiwi bag next to the blanket.

“Great, let’s start eating. And we can just grab the snacks from the floor when we feel like it.” Diana smiles as they dig in and Chris starts off by grabbing a chocolate egg covered in sprinkles.

Diana pulls the dessert out of the fridge, unwrapping it and spending a little too long adjusting the decorative strawberries. She successfully manages to carry it to the picnic blanket without tripping over the candy covering the floor, although some roll around in her wake.

As she treads back to the kitchenette to make tea, she picks up a candy and something small falls out of her pocket.

“Can you come to pick out the tea, Manual?” she asks while filling the water cooker.

Manual picks a rooibos tea from Diana’s large collection. His eyes keep drifting back to Chris, scooping out the dessert and looking ready to devour it.

“You haven’t told anyone about you know…” Diana begins in an urgent, hushed whisper.

“About what? Oh yeah, don’t worry about it.” Manual waves her off, not taking his eyes off Chris.  “Honestly, Di, it’s not that big of a deal. Everyone has-”

“Shh. It might not be that big of a deal for you, but it is for me. So keep quiet.” Her whisper is barely audible now, pleading. “Please.”

“Of course, whatever you need.” Manual’s tone remains casual, a stark contrast to Diana’s desperate eyes.

“Just know that it’s nothing to be ashamed of,” Manual adds as Diana aggressively pours water into a chipped teapot.

“Is that your penguin?” Heidi asks, pointing out the big window. Manual and Chris join her, trying to decipher the type of bird.

“No, it was fatter and taller,” Manual says. Heidi is back on the blanket, having made space for the others at the window and dusting the tiramisu with a fresh layer of cocoa powder. She truly brought everything.

“I’ll be right back,” Chris says on her way to the small bathroom.

“How did you make the nice layers?” Diana inquires, picking off the decorative strawberry and carefully laying it to the side.

While Heidi explains the process, Diana places her plate down on the blanket. Diana wipes her hands on her pants, leaving behind powdery marks. The brown of the cocoa powder is interspersed with white smudges, but Diana does not seem to notice or care.

Manual lifts a seemingly oversized forkful of dessert to his face, a shiny red strawberry on top. No special dessert cutlery in student housing. The toilet flushes.

As the dessert touches his lips, he sinks into an expression of extreme pleasure that melts into one of fear as the food slides down his throat. His face turns redder and redder, like a sped-up time-lapse of a strawberry ripening in the sun.

Diana yells, fetching water to cool his throat and burning temples. Heidi drops her untouched plate and starts rifling through his backpack, discarded by the door, searching for an EpiPen whilst hot tears slide down her face.

Manual sputters and chokes, grasping for his throat as it swells shut. All the while Chris is singing the happy birthday song, blissfully unaware of the life-ending while she washes her hands.

With a final croak, Manual collapses. The EpiPen juts out of his thigh, utterly useless against the poison he ingested.

“Did you start eating without me?” Chris complains, her face contorting in shock as she takes in the scene outside the bathroom.

“Is he? He can’t be, is he dead? What the fuck just happened?” Chris is pale, frantically checking Manual’s body for a pulse.

“It happened so quickly, I was sure that I didn’t include any peanuts and I washed everything. I was extra careful and checked the ingredients twice.” Heidi begins to sob heartily.

“But there’s an epipen, that would help against an allergy, right?” Chris asks.

“It all happened too quickly, that wasn’t a peanut allergy,” Diana concludes, shaking her head. “We need to call the police.”

Diana makes the call, turning away from her friends and the scene on the floor. The line is busy for a long time, the doot-doot-doot echoing in the utter quiet of the room. Even Heidi manages to cry more quietly.

“It’s going to take the police a little longer to come, they’re busy with the penguins,” Diana answers, getting off the call.

“The penguins?” Chris asks in confusion.

“Yeah, apparently they escaped the aquarium and are causing a lot of chaos.”

“So Manual was right, he did see a penguin in the city.” Heidi sighs. “We should call an ambulance then.”

“What good will that do? He’s dead. Unless they can do some necromancy and raise the dead we’re just wasting resources that can be used to save someone else,” responds Diana.

“No better day than Easter for bringing someone back to life,” Chris comments.

“We can’t just leave him here,” Heidi protests. The guilt is written all over her face. It was her dessert that was truly to die for.

Diana begins to move around the body, taking images of every angle before doing the same with the dessert. Mascarpone and bits of cookie are smeared all over the floor and Manual’s shirt, his mouth is stained red from the strawberry.

“What are you doing?” Chris looks up from her phone in disgust.

“I’m taking photos for the police. If it’s it not an allergic reaction it’s poison, making it murder and my apartment an active crime scene.” Diana continues on capturing the room itself.

“Did one of you drop this?” Heidi picks up a small pink container from the candy still strewn all over the floor.

“Are you seriously eating candy right now?” Chris asks in horror. Her thumbs continue to jump across the phone screen, a practiced rhythm of typing.

“I stress eat, I can’t help it. But seriously, what is this? It’s like a cute little Tupperware.” As Heidi holds the vial into the light, the leftover white powder shimmers.

“Heidi, I’m pretty sure that you’re getting your fingerprints all over the murder weapon,” Diana states.

The hum of the fridge fills the silence.

Heidi turns in horror to Chris, who just continues scrolling.

“Are you seriously just on your phone? Can you please participate in the conversation!” Diana orders Chris, staring daggers at her.

“Fine, you know what I think? You know way too much about how to handle a ‘potential murder’. Who knows, maybe it really was just an allergic reaction!” Chris screams.

“I’m sorry that I enjoy watching crime documentaries and have the common sense not to pick poison vials off the ground!” Diana yells back.

“Who are you texting that is so important anyway?” Heidi leans over to read the new message lighting up Chris’ phone.

“‘It’s over now, we have the money so just stay calm and I’ll see you tonight, seriously, who are you texting?” Heidi tries to wipe the remainder of her tears away, her expression changing to anger.

“That’s private! And out of context, we were having issues with getting money from people who are joining the psychology cabin trip,” Chris snaps in return. “And I wasn’t even there while he died.”

“Honestly, that makes you even more suspicious,” Diana says.

“And it’s just a coincidence that the vial is your favorite color?” Heidi questions, unable to look Chris in the face.

“What about you Heidi? You had all the opportunity to add the poison, I saw you sprinkling stuff over the dessert just now.” Heidi’s lips wobble, as Chris adds “And you seem awfully anxious about us eating that dessert.”

“That was just cocoa powder, I wanted it to look pretty,” Heidi responds, pulling herself together for now.

“Come on, Chris, we all know that you and Manual were more than friends. Although based on your text message maybe that wasn’t what you wanted from him,” Diana responds.

“Just because you’re hosting doesn’t mean you aren’t a suspect either!” Chris turns towards Diana as a siren wails. “I still think you did it.”

The police must have rounded up the penguins. The three wait in tense silence for the police to arrive, ready to share their suspicions.

Is Chris right in suspecting Diana? Or was it Chris herself or sweet Heidi who killed Manual?
Send in your guess at ansvarligredaktor@studvest.no before the 18th of April and be the lucky winner of an Easter present!

Want to learn more about this Norwegian tradition? Check out this article: WTF is… Påskekrim?