Both Norwegian and international students participated in the Women's March Bergen. Many expressed anger and concern, but also hope. 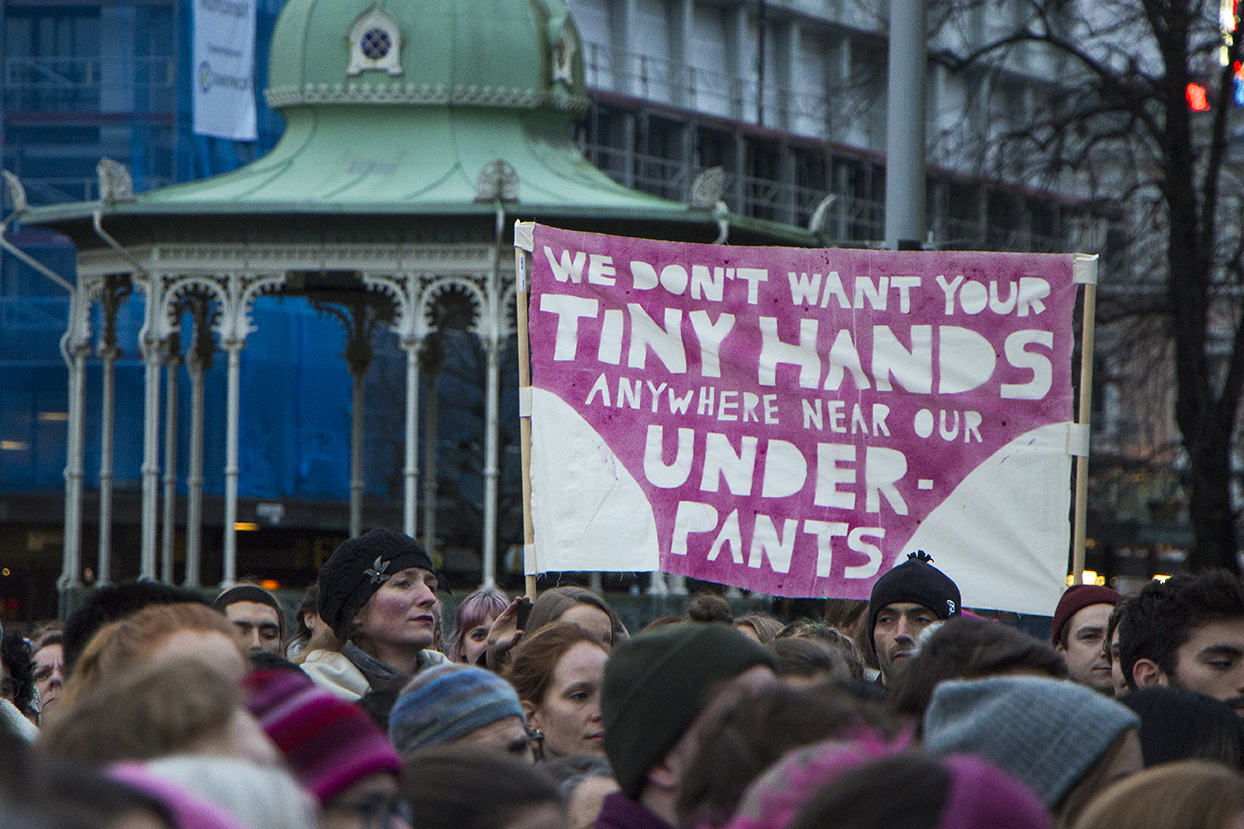 Women’s March Bergen took place last Saturday, with many students attending to take a stand against threats to Women’s Rights.

Men, women and children also took part in the march, in support of those protesting in Washington D.C. What began as one march turned into a global protest with several million participating. The event in Bergen aimed to show solidarity with people marching worldwide, and stand up for common global values, such as equality, diversity, inclusion, and a sustainable environment.

The event included several speakers, music and poetry.  One of the organisers of Women’s March Bergen, Anine Bråten, is a psychology and gender studies student. She began organising the march a mere week before it took place, but still managed to gather an impressive crowd. She stated that «these marches are extremely important. They show everyone that they are not alone, and we are stronger together.»

Many students could be found at the event, each hoping to convey their unity with the United States. Susanne Quist, an art student, was in attendance with a sign that made her feelings clear.

– It feels so good to stand up against all the unacceptable things that were said during the election,  and I felt like this was a good chance to protest and make clear that I will not accept this. I think for women in America it will be good to see that there are so many supporting them and fighting against any changes that might happen.

Viola Grilli, an Italian exchange student, cited similar reasons for attending the march, stating that «this is a way to tell American women they are not alone.» Additionally, she mentioned she was marching because she is «concerned about what the situation will be like for children, in the future.»

Grilli also mentioned that she thinks it’s important that men support women by attending protests and marches, as if they are involved it «gives us more credibility».

– Trump will still do whatever he wants to

Several men did in fact attend the march in Bergen, one of whom was Daniel M. Bautista, an economics student from Spain. He described himself as «a women’s rights defender», who thinks it’s very important that men fight alongside women for their rights.

– I have come along because I think that Donald Trump taking office is degrading for women, and for immigrants. These marches may not get us anything in return, because Trump will still do whatever he wants to do, but at least we can say we are standing by the people there.

Charlotte Paule, a political science student from France, felt that «there are so many different events in so many different cities going on today that people will have to listen. There comes a point where they cannot close their eyes and pretend they cannot see us. Hopefully there will be an impact on Washington.»

However, Brooke Wilkerson, an american, is not confident that the marches will make a difference to American politics, «especially with a political party that is very inward focused, and not particularly interested in what is going on in the rest of the world.» Despite this, she still stated that it was «great to know other parts of the world are supporting us.»

Bråten expressed that this march was not only about women’s rights in America. In her speech she noted that women’s rights violations still happen in Norway, and all over the world.

– The issues we are marching for today are global issues. They are not only relevant in the USA, but they are relevant here in Norway too. We often do not speak about these issues because we do not have Trump as a focus point that forces us to acknowledge them, so we needed this march to encourage discussion about our own problems.

She stated that the marches would «make clear to the world that we want a better future.»