Until recently I didn’t think so many people in Bergen could handle its weather. 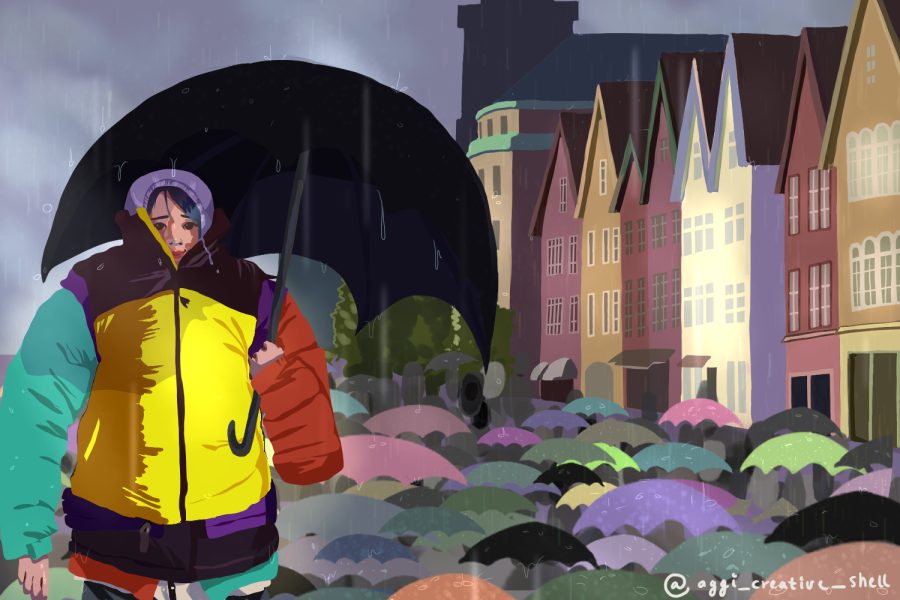 RAIN. Ever since i moved to Bergen in the summer of 2021 I've wondered: How do we as humans cope with such constantly bad weather?

When I’m at home, there is usually a very short period between the moment I realize that I have a lecture in the city center and the moment I have to leave to get there on time. We’re talking about five minutes. Just enough time to grab my keys, fill up my water bottle and storm out of my apartment.

At that moment I’m ready for anything that might delay me: Missing the bus, the Småpudden bridge closing in front of me, or meeting a friend along the way. But I’m not ready for the Bergen rain. And believe me, I usually get the rain. To this day my reaction still is: Damn it, not that rain again.

But it’s not just the rain that makes Bergen so strange, it’s also the heavy fog that covers the surrounding mountains and the constant lack of sunlight. «What is the sun?» my friends and I sometimes quip.

Yet ever since I moved to Bergen in the summer of 2021 I’ve wondered: How do we as humans cope with such constantly bad weather? Do some cope better than others? Perhaps the Bergen locals, who seem to always be on high rain alert with their waterproof clothing and umbrellas, don’t even notice the weather anymore?

After talking to some locals and exchange students, I realized that very few people like the rainy weather, not even the people who live here. But what is amazing is that nearly everyone seems to find ways to cope with it.

– I’m waterproof. You must be to live in Bergen!, Sunniva Refsdahl, a neighbor in my dorm, tells me.

Curiously enough, despite being born and raised in Bergen, she doesn’t own waterproof clothes but she always takes an umbrella with her because it can start to rain at any moment.

She also manages to enjoy good weather but not be bothered when it turns bad.

– Rain does not affect my mood but sunny days, she says.

– When the sun is shining and the birds are singing I am filled with overwhelming joy.

Charlotte Lie, a Sammen psychologist and a local who has lived in Bergen for decades, has a similar approach of enjoying the good and ignoring the bad.

– Longing for the spring and the summer keeps our hopes up. When good weather and the sun come, Bergen explodes with life, in its mountains and parks, she told me.

– That always makes it worth it.

I interviewed her to learn more about the impact that Bergen weather has on our mental health but after I left her office all I could think about was the interesting point she made: The Spaniards may get more sun but by all accounts, they are not happier than Norwegians.

But it’s not just locals who cope so well. At one of my lectures I talked to Alessia Di Muro, an exchange student from northern Italy who arrived in Bergen in January, and immediately what struck me was her resolve.

– You just have to adapt, she says.

Generally the weather doesn’t affect her mood but it does impact her productivity.

– When it’s gloomy outside I’m more inclined to stop my work.

And even though she still hates the rain, she manages to enjoy it and rejoice in the sound of raindrops hitting the windows.

Yet surprisingly, Bergen weather doesn’t seem to be that overwhelming to most students. When psychologist Charlotte Lie talks with her patients, the dark and gloomy weather is rarely their major concern.

– In the end, it’s all a matter of personal characteristics but usually, bad weather doesn’t cause depression, it just aggravates clinical depression that’s already present, she says.

But she stresses that no matter how bad the weather gets we should not stay isolated. She gave me some advice for my final months in Bergen:

– To protect your mental health, wear good clothing, don’t stop going outside, use the daylight and get some exercise.

Now I wonder if I overestimated the power of rain and gloomy weather to bring us down. After all, despite the weather, Bergen is the second largest city in Norway. Its strange climate can’t be that bad. Or maybe the weather is powerful, but so are the people who live here. Maybe they are a living testimony to human resilience.

Read also: – It would be ideal if Mexico was like Norway
Read also: WTF… is going on with alcohol in Norway