Students express that this feeling of unsafety doesn’t necessarily go away when crossing the border to Norway. 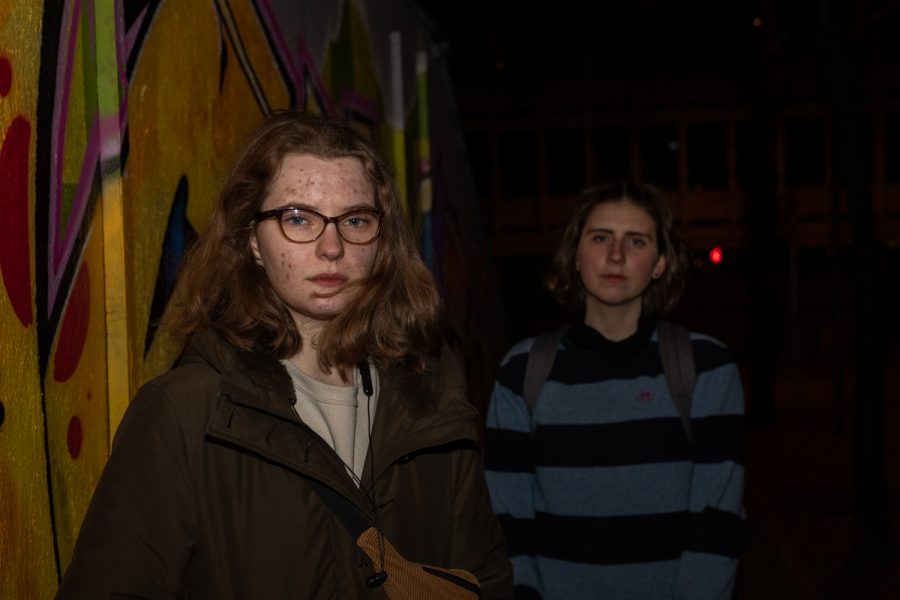 – Of course I know Norway is a relatively safe country, but still, I caught myself holding my keys in my hands at night, says Viktoria Labus (20), exchange student from Aachen in Germany.

Two female exchange students share their experience of their own safety in Bergen.

Labus thinks Bergen has a safer atmosphere than her home country. However, she still finds herself holding her keys in her hand for defense, and avoids having headphones in both ears while walking home alone at night.

– I guess that hasn’t changed just because I’m in Norway, Labus says.

She adds that a lot of thing can happen to you during a walk home that isn’t a murder or sexual assault.

– Usually there are other people on the bus. It can be creepy as well, but it still feels safer, she states.

Additionally, Labus expresses that she’s not afraid all the time in Bergen, but that she feels safer to take preventive measures, such as sending a text message to her friends when she arrives  home.

– I think violence against women has no nationality, says Labus.

Celine Madlen (21), exchange student from Heidelberg in Germany, agrees with Labus that she feels safer in Bergen than in her hometown. Both of them agree that the streetlights make them feel safer here in Bergen.

However, she doesn’t do the same precautions in Bergen as Labus. She is more on the lookout in her hometown when walking home alone.

– My dad even gave me a rape-alarm, but I have never been close to having it in my hand, she adds.

Even though Madlen doesn’t feel scared in Bergen, she acknowledges that the incident with Sarah Everard points to a common problem for women.

– Every girl knows another girl who has faked a phone call or had a pepper spray with her. It’s just another thing we have to be extra cautious about, and waste time on, she adds.

Lars Morten Lorthe, chief of Bergen Sentrum Police station confirms that Bergen is, in general, quite a safe place to be for women, even in public places.

– Luckily we don’t have high numbers of rapes and robbery against women in public places in Bergen. We are very happy about that, he says.

Lorthe  tells that rape cases have a very high priority with the police, especially if they are committed in public places.

In 2020, there were five reported cases of rape and nine cases of robbery against women in Bergen in public areas. However, if cases in private addresses are added, this number increases to 61.

To prevent these cases, police patrol the streets and try to inform the public when necessary.

– If we know that there is a dangerous man out there, we try to warn people, Lorthe points out.

The responsibility of the society

The case of Sara Everard is just one of many. Women often feel unsafe.

When Labus was asked how the society can improve and take action to help women feel safer, she thinks that the most important part is to acknowledge who are really responsible for women’s safety.

Officer Lorthe believes that the attitude of the society is an important part to acknowledge when it comes to women’s safety in public places. He also adds that it’s because of this attitude, that the crime rate in Norway is low compared to other countries.

– We try to have small differences between people and try to count in everyone no matter the background they have. Everyone counts, he says.