Learning the language of the country you are visiting is the best step to feel less foreign. But be prepared that there is not one Norwegian language. Here is the reason. 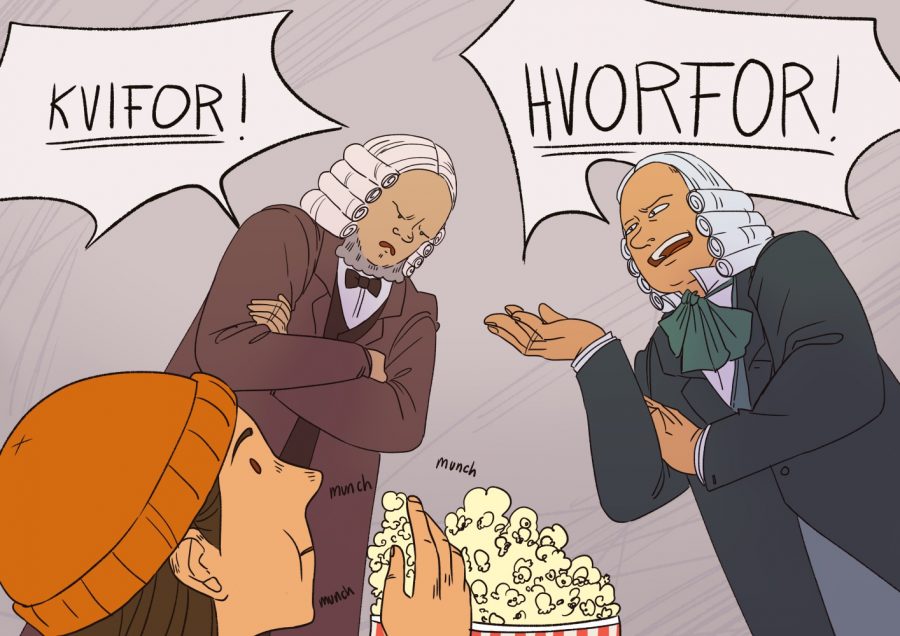 WHY? «Kvifor» and «hvorfor» are both Norwegian words, meaning «why».

Ingvild Hauglid
Illustratør
hauglid@studvest.no
WTF is... WTF is?
WTF is…? is a column where Studvest’s English section points out different interesting or strange aspects about living in Norway from an International’s perspective. The column can be both serious and light hearted, and is based on the journalist’s own experience.

There are two Norwegian languages and we only teach one of them, my language learning app tells me, of course only after I already subscribed for their courses. The first backlash in my motivation to learn Norwegian came fast: Do I have to learn two languages now? I read a bit further and realise that Bokmål, which my app is teaching, is the more common one overall and quickly I regain my will to learn it. But still, I wonder why Norway has two languages. It is such a small country; little over five million people live here and still, they could not agree on how to speak.

After arriving in Norway, I learned that the Norwegians do not have two languages in the sense that I expected: They have two written languages, but every region has its own dialect. You really do not give language learners an easy time when there are several ways of pronouncing most words! But I also got curious about how this could happen. Most languages have dialects, but their speakers agree on one “high” version to use in an official context. Why did Norway go a different way?

The linguist Margunn Rauset explains to me that after Norway came under Danish rule, Old Norwegian slowly disappeared. At the time Norway got out of its union with Denmark there was no written Norwegian language left anymore. This was during the Romantic area in which the idea of a nation-state began to spread across Europe, and connected to the nation was always its own language. Therefore, when the Norwegians tried to establish a unity within their state, they found it important to find their own way of writing.

There were two different solutions to this problem. Ivar Aasen, a self-taught linguist, spent around four years studying traditional Norwegian dialects. Based on this he created the variant that we know today as Nynorsk.

Knud Knudsen, who created what we now know as Bokmål, took a less revolutionary approach. He based the language on Danish and replaced parts of it with Norwegian words. Knudsen thought that his and Aasens way of creating a Norwegian language would melt together at one point. But that still has not happened and so the Norwegians still have two written languages.

That the languages are still separated is mostly blamed on cultural differences. Especially people from rural areas on the Westcoast could identify themselves with Nynorsk, but the upper classes and urban population preferred Bokmål. Today Bokmål is the main language for 85% of Norwegians, and therefore a good choice to learn if you want to understand as many Norwegians as possible. And due to its Danish roots, it also gives you some advantages if you cross the border to Denmark for a Post-Covid vacation!

Every Norwegian speaker can read both languages, even though some Bokmål users do not want to learn Nynorsk. In their everyday life, as well as in university exams and official documents, one can always choose which language to use. But even within the two languages there are some varieties. And teachers have to know all of them, so nobody has a disadvantage.

While my first impression was that it sounds like a lot of additional work to have two official languages, Rauset highlights the cultural diversity which the two languages stand for, as well as the many dialects.

Dialects are common in most languages, but the way the Norwegians handle theirs is quite unique. In other countries many people change between dialect and high language depending on who they talk to. But the Norwegians speak their dialects on every occasion, at work, at university or in the parliament. And they do not want it to water down too much, when moving to a new place. If you want to know more about the different dialects, just ask the Norwegians themselves. They usually love to talk about it!

Want more? Check this out: