A quick guide to Norwegian politeness: Three steps to get off the bus without human contact. 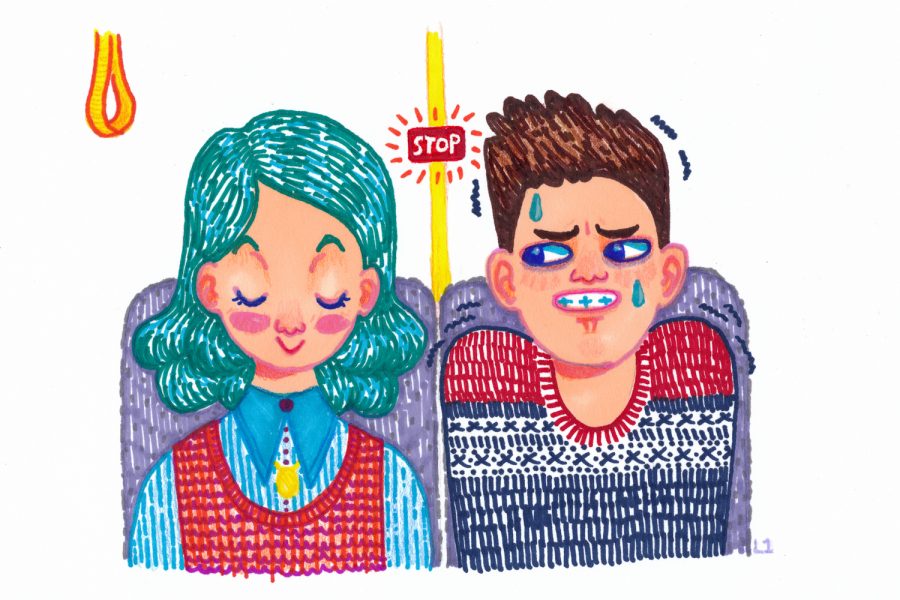 To me, even after living amongst Norwegians for half a year, one of the most puzzling things about them is still their way of social interaction. Depending on the situation Norwegians can either be the politest people of all time, or the most antisocial human beings ever. It might be the climate, or the fact that there are just over five million of them, but sometimes it seems like they are simply overwhelmed with other people and would much rather sit on a mountain top, alone, with their Kvikk Lunsj and an orange by their side.

Just like the rest of us, even Norwegians are obliged to go to university, work or school. Because of limited parking space and the astronomical toll fees most of them do so by taking public transport. Which leads to the same challenge every day: How to get on and especially off the bus or Bybanen with as little human interaction as possible?

If there is one unwritten rule it would probably be:

Don‘t talk to people. Especially if you don‘t know them already.

Norwegians are not on the bus to socialize. Nobody is, but they take it a bit further than most cultures. Where you might get away with talking to your seat-mate in other countries, in Norway that’s definitely a big faux pas and probably considered an invasion of privacy. Therefore, getting off the bus requires a whole array of non-verbal signals to tell them that you have to get out, without actually telling them. Here is my quick step-by-step guide to fit in by making  them believe you’re antisocial as well.

Press the stop button before anybody else does. This signals «I need to get out» without any misunderstandings. However, be warned: Timing is key here! If you press it too early you might have to stand in the aisle because your bus is nowhere near your stop, while pressing it too late might cause the granny beside you a heart attack from getting up too fast.

Rely solely on non-verbal signals involving your personal belongings. You can sit up more straight, pick up your umbrella, rustle your backpack a little and store your cellphone in your pocket, so that everybody around you knows you are preparing to get out at the next stop.

Accept the failure. Your mission to blend in with the Norwegians was unsuccessful, you need to move on to actually using verbal communication before you end up in Knarvik or at the airport. Nevertheless, still try to tone it down by mumbling «unnskyld», while nodding towards the door, still trying to keep it as impersonal as possible.

In the end even Norwegians are just people. Some of them might be uncharacteristically extroverted, while others might fit the cliche a bit better: Avoiding human kind during the weekdays, just to run around Bergen, intoxicated, on a Saturday night hugging strangers. It’s never a good idea to overgeneralize people, but in spite of it all, clichés always have a bit of truth in them. And who knows, one day you might even find yourself in Sandviken after a water-pipe burst, talking to really social Norwegians you just met while walking towards the next bus stop. You might even be enjoying free candy that Skyss handed out to apologize for the inconvenience.

With Norwegian politeness you never know.