«Raske briller», the Norwegian tinted sporty shades that make everyone who wears them seem like a professional athlete. 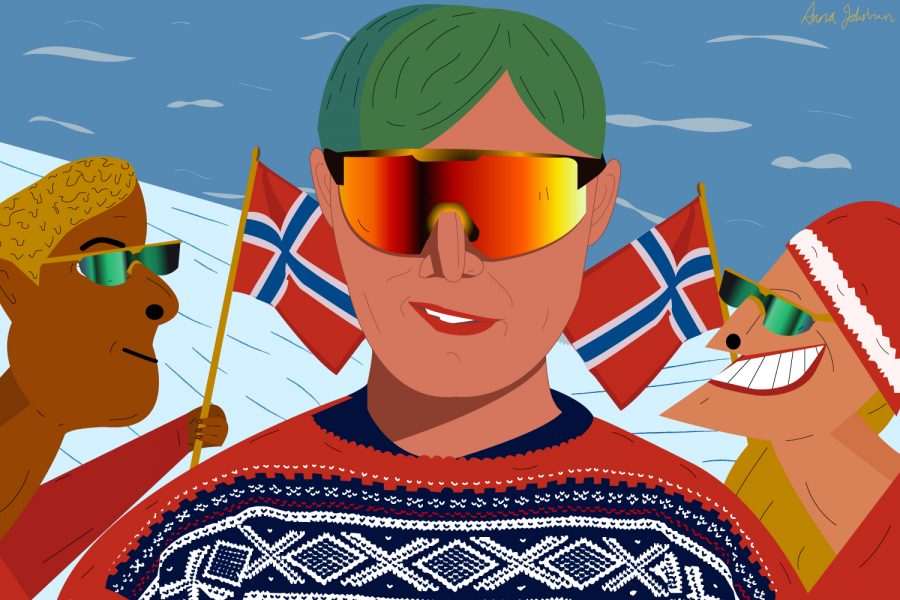 SHADES. The tinted sunglasses are suitable both while skiing in Norway and for wild parties. Illustration: Anna Jakobsen

As soon as you leave your own four walls on a sunny day in Norway, it’s almost impossible not to have noticed the famous Norwegian «raske briller», most likely worn by a cyclist at full speed or a hiker running up one of the seven mountains.

Before I moved to Bergen, I knew that the Norwegians, in general at least, were in very good shape. I couldn’t go out for a run without other runners overtaking me at full speed. Or walking up Ulriken without some Norwegian running up and down the mountain without even catching a breath or taking a sip of water. I guess that is only allowed when reaching the top.

I have to confess, that I was a bit jealous of their strength and admirable endurance. However, I was more intimidated by their running and hiking gear. Many of them had numbers on their backs, similar to the numbers runners receive when running a marathon. To top their outdoor gear, they all had sporty sunglasses. The memory of the tinted shades followed me around like an inescapable shadow.

«Raske briller» are the Norwegian tinted sporty shades that make everyone who wears them seem like a professional athlete. «Raske», meaning fast, and «briller» meaning glasses, making the translation «fast glasses».

The Urban dictionary prefers to use the term «douchegoggles» for «raske briller», where they are basically defined as sports sunglasses with reflective lenses that are worn by douchbags.

«Raske briller» comes in various colors. The ones with blue glass are recommended to people who are in close contact with water, such as sailing and skiing. Orange tinted glasses are suitable for conditions with the most light and for ones who do different kinds of outdoor activities. Additionally, many of them have UV protection that protects the eye area from UV radiation from the sun.

Therefore, the shades are quite practical for outdoor activities since they are fairly light, provide protection from the sun, sit well, and don’t fall off easily.

It might come as a surprise that the «raske briller» are not only used for outdoor activities. The shades are often worn at parties, such as «Russefests» which is a celebration for graduating students in high schools in Norway.

Wearing «raske briller» at this kind of party can make you seem very cool, or as the dictionary prefers to say – like a douche. There’s even a song, named «Raske briller» by Nicolay Ramm. Wearing the shades puts on a certain atmosphere among the group. They set the mood like there is something exciting about to happen. Similar to wearing «bunad» or «festdrakt» on the 17th of May, Norways’ national day.