I thought only Mexicans were crazy about tacos, but in Norway I found people just as enthusiastic. Maybe not my idea of tacos, but tacos either way… 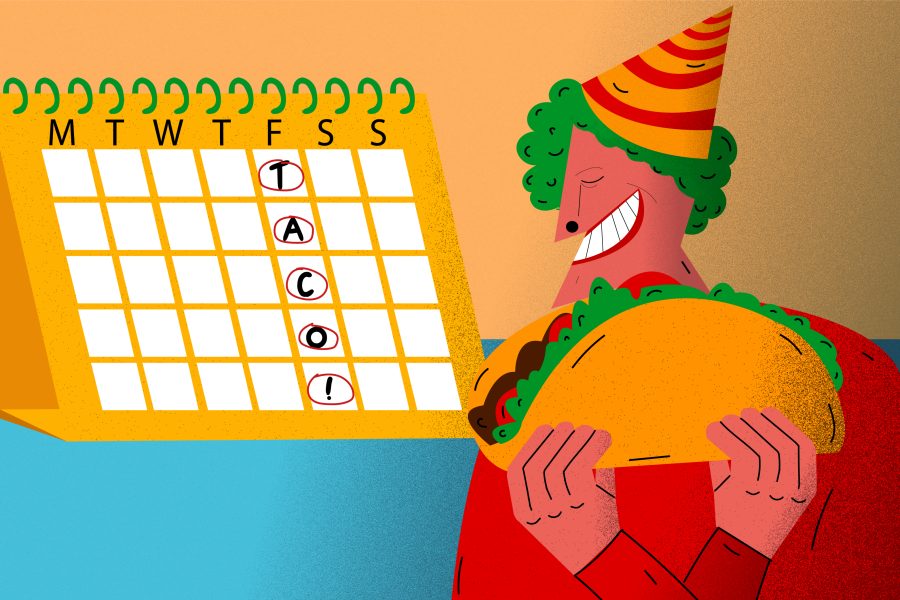 After settling in my shared Sammen apartment I did what every human must: get food. In the company of my flatmate Thomas I made my way to Rema 1000. Aside from the shock of the prices of beer, I was set aback by the taco aisle.

After walking past the different salmon-based products, I encountered two full shelves of tortillas, «taco spice mix», salsas, taco shells and tortillas in the shape of baskets and cups. Even 16 hours away from my home in Mexico, I found myself surrounded by dozens of taco products.

He told me I would come to see the ritual myself if I went to the store on a Friday. Everyone would buy meat and avocados. I walked home wondering: Why are tacos such a big thing in Norway?

What is a taco?

Miriam Angela Folland, a journalist from the University of Oslo, wrote her master thesis on tacos. She argues that tacos got to Norway via the USA. It was during the sixties oil craze that many Americans moved to Norway and brought Taco cuisine to Stavanger. The 1968 Olympics were held in Mexico, which brought even more attention towards Mexican culture. In a 2014 survey, tacos were voted Norway’s fourth national dish.

To understand taco culture in Norway, I needed to know what Norwegians knew about tacos. Even for Mexicans, distinguishing a taco from a quesadilla is no easy task.

I reached out to a Norwegian student to better understand the Norwegian version of a taco. Magnus Farstad, an information science student from Ålesund, started eating tacos at a very young age. He was 10 years old when he started having them on a regular basis at home. In fact, he always has them at home. His family enjoys them while watching TV.

As a student, he doesn’t have them as often, but they serve as an excuse to gather with friends from school. The recipe never changes: Minced meat cooked with the taco spice mix, sour cream, store bought salsa, cheese and vegetables. All inside a wheat tortilla.

But Magnus now has a Mexican flatmate who changed his conception of tacos. In the past, a real taco was, according to Magnus, the Norwegian one. Now this is just a Norwegian take on Tex Mex food.

What about Mexican tacos?

Even though tacos are an essential part of life in Norway, Magnus doesn’t believe that this tradition has caused a big surge of interest in authentic Mexican tacos. However, some Mexican restaurants inhabit Bergen’s food scene.

While walking around Bryggen, I noticed two Mexican restaurants whose menus looked pretty legit. I reached out to one of them.

I was welcomed by the owner Anna Kristin Håland. Life in Mexico changed her conception of tacos and Mexican food in general. Because of that, her restaurant’s mission is to introduce authentic Mexican cuisine to Bergen. To show that there is more food beyond tacos and that there is more than one recipe.

Anna knew about tacos thanks to «tacofredag», and even though she does not consider them as tacos per se now, she thinks they changed the eating ritual at the Norwegians home. She mentions that taco invites people to mingle. Tacos force you to place all the ingredients on the table, which entails interacting with others in order to assemble your taco. Eating becomes an invitation to start a conversation.

An ocean away from home, I found in Bergen a very different version of tacos, but with one thing in common with the ones at home: They are meant to be shared. «Tacofredag» is an excuse to gather.

Taco in one hand and a cold beer in the other. Even if I found Norwegian tacos completely different from my own, perhaps less tasty, I do now find a home in both. If you’re eating tacos soon, there’s only two things left to say: «buen provecho» and «velbekomme».

Read also: – It would be ideal if Mexico was like Norway
Read also: Essay: Facing the rain head-on