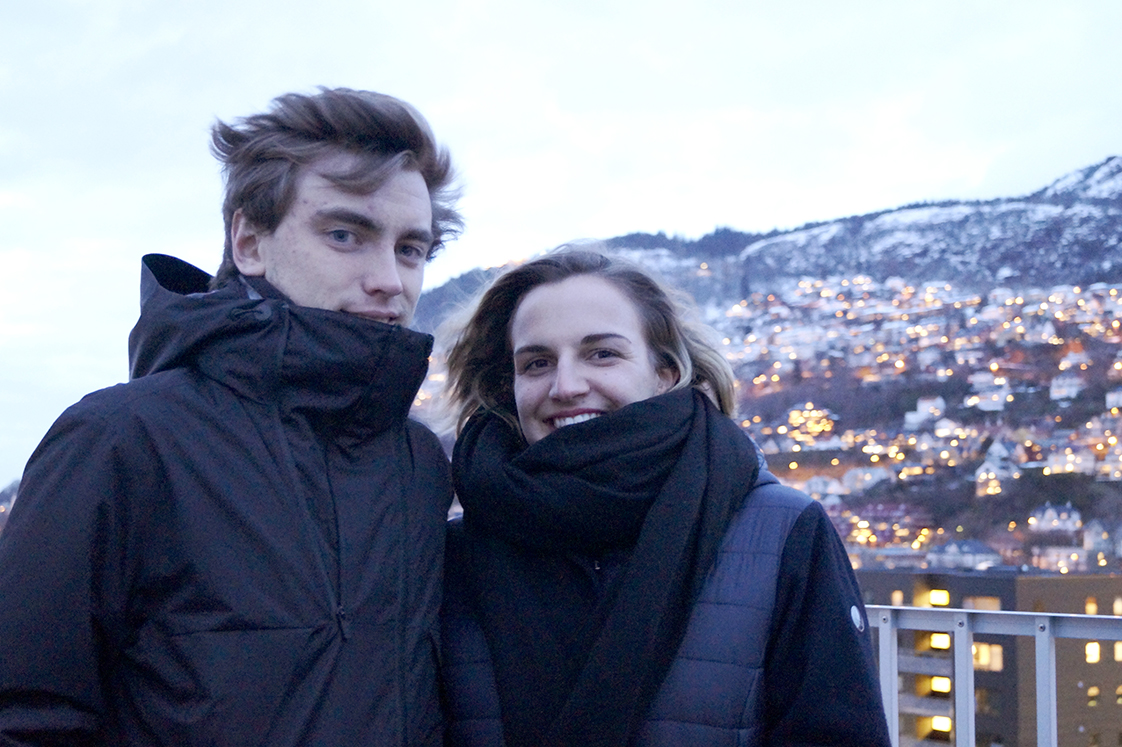 Friendship with Norwegians appeared not always easy, Studvest wrote recently. If making friends is like hiking Ulriken for the first time in the rain, we can easily imagine what should be the long trek to date them: Maybe something like Trolltunga? We were curious to meet those adventurers. Some of them agreed to share their story.

Alixe Averty, a French communication student, and Steffen Algrøy Boga, a Norwegian student, met on Tinder. While they didn’t really expect a lot from the application, they have now been a couple for some months. For Alixe, Tinder has unexpectedly been a quick way to meet a Norwegian in person.

– I was an exchange student last year so I knew how hard it was to get to know locals, says Steffen.

Bård Solås, a Norwegian student, and his French girlfriend, Emma, met in 2016 during their exchange in Turkey, through the ESN Summer Introduction Program while studying in Izmir. They both wanted to travel around, but at that moment they were just friends.

– In the winter, we spent a weekend together because no one else could come. It took time before we got together. In December, I had to move from my room. There was a free bedroom in her collocation so we began living together, Bård recalls.

But it wasn’t until January that their story really began.

– It takes a longer time to get to know each other here than in France. Before the first kiss for example, I was very patient, tells Alixe, gazing at Steffen with a half-incriminating, halfcheerful look.

– I like to know things before I make any big decision, answers Steffen, very calmly.

Christophe Balin, a French student in Bergen, thinks Norwegian men looking for a serious relationship are more passive than French ones.

– I have the impression Norwegian men are the same as the idea we have of French women: We think they are romantic and quite reserved. I have the feeling it’s something more common among Norwegian guys.

For Ramin Safa, a Norwegian student in Dentistry, the biggest problem was his timidity.

– I fell in love with a girl in my class, but I was too stupidly shy to tell her. But as they say in the movie The Intouchables: «No arms, no chocolate», tells Ramin.

Despite this belief that Norwegian women are more enterprising than men, Steffen was surprised that Alixe sent him the first message.

– Everyone told me I had to make the first move and keep the conversation going. I’ve never experienced Norwegian women making the first move, he says.

Being with a foreigner is a way to discover constantly new things and ways of thinking for Bård. That’s what he calls the «tourism aspect».

– It makes our relationship more interesting, not being Norwegian and French in particular, but having different backgrounds, he explains.

In France, Bård enjoyed cultural diversity, architecture, food and arts. In Norway, his girlfriend was amazed by nature, he tells us, despite her frustration due to the weather, the lack of French ingredients and the absence of polar bears in Bergen. Sometimes, their different perceptions could be funny.

– Many times we were drinking cheap wine, she found it was very bad whereas I thought «It’s fine, it’s alcoholic ». In general, she said I had no taste, recalls Bård, smiling.

Alixe also points this out to Steffen:

– I’m not used to the way you’re drinking red wine sometimes. In France, we respect it a little bit, we don’t drink red wine just to get drunk.

But more importantly for her, she feels enriched by Norwegian values, which she experiences more deeply with Steffen.

– Norwegians foster more good sides in life and I noticed this in our relationship. We communicate a lot but don’t focus on small problems, she explains enthusiastically.

In the same vein, Alixe appreciates Norwegian trustworthiness and openness, which participate to that peaceful communication.

– I’ve never felt judged here. Norwegians always listen to you and comment, but never criticise because they have different views.

Both couples we met highlighted that there are no big cultural differences between them and that the hardest step of the trip was the first. So hikers, put a Kvikk Lunsj in your pocket (or maybe two…) and you may have a chance to go the distance.